CHANDIGARH, Punjab—The agitating farmers of Punjab have announced to fully boycott BJP leader Harjit Singh Grewal who has been trying to justify the contentious farm laws since day one. The Bharti Kisan Union Ekta (Ugrahan), Bharti Kisan Union Ekta (Dkonda) and villagers of Dhanaula constituency have asked the lessee farmers not to take Grewal’s land on lease. 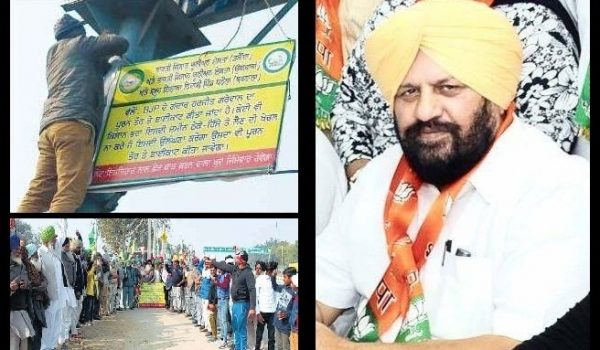 On December 27, the agitating farmers installed boards in Dhanaula area asking lessee farmers not to take Harjit Grewal’s land on lease and boycott him completely.

Interacting with media on this occasion, Bharti Kisan Union Ekta (Dkonda) leaders said that Harjit Grewal has back-stabbed the farmers by speaking against the farmers struggling for their existence. They added that they have announced to completely boycott Harjit Grewal and no lessee farmer should take his farming land on lease.

“If any lessee farmer goes against us and take Grewal’s land on lease then he too will have to face boycott,” they clarified.

They further said that they were installing the boards to raise awareness among farmers about this boycott of Harjit Singh Grewal.