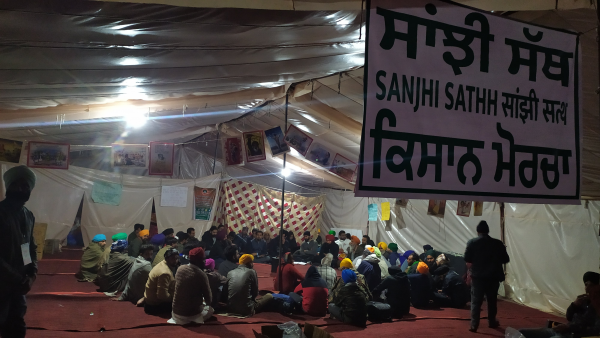 1. Sikh elder Darshan Singh passed away today after falling off a tractor trolley.
2. Recitation of Vahiguru is happening every Amritvela many are feeling bliss of Sikhi. Hundreds sitting in groups doing Saas Giraas simran.
3. Karma has a way of catching up with those with bad intentions. Haryana Chief Minister Kattar who used police to attack Farmers at the beginning of the protests. Yesterday his car was surrounded and shaken up by locals in Haryana. Police had to rescue his car to escape.
4. Today BJP MP Rajinder Goonda was pelted by stones as large numbers of villagers from his own village attacked his vehicle. Video appears of his cars speeding as they are surrounded by his neighbours.
5. Haryana CM Kattar files a case of attempted murder against farmers showing black flags to him in Haryana.
6. Punjabi Tribune Investigation. Punjab’s politicians are benefiting from Reliance’s mobile towers. Many Akali Leaders gave their lands for Jio towers. They are getting an income of 20k.
7. Many village panchayats complaining that village land were used for Jio towers without their consultation.
8. In February last year, Govt of India had approved the privatization of 6 airports in India: Lucknow, Ahmedabad, Jaipur, Mangaluru, Thiruvananthapuram and Guwahati. When bidding was taking place Adani group was not meeting the criteria for bidding as it had no previous experience. So within days, the criteria was changed and Adani was awarded all 6 airports. This is how Modi rewards those who fund BJP.
9. Hundreds of Gurdaspur villagers stop construction of warehouses of Adani group. They said no construction will continue until farmer issue is not resolved.
10. Student leader Kanaiya Kumar speaks at a mass gathering in favour of farmers.
11. The group of 40 protesting farmers’ unions, which earlier participated in talks with the Centre, unanimously decided on Tuesday to respond to its proposal for further talks on Wednesday, marked across the country as ‘Kisan Diwas’, and reiterate their demand of repeal of the three new agri laws.
12. Today Farm leaders hosted webinar on Zoom. Leaders will answer questions of people from 12 PM. 10 thousand people will be allowed to join by link. Kangna Ranaut, Payal Rohtagi and Mukesh Khanna have been invited to join the webinar and ask questions to farm leaders.
13. Around 2 crore signatures from across India, urging the withdrawal of the three farm laws have been collected. It will be submitted to the President of India
14. Kerala governor says ‘no’ to special assembly session for passing resolution against Central farm laws
15. BJP workers attack activists in Bihar who support the farmers by smashing their vehicles, audio equipment and beating them with heavy lathis.
16. Farmers’ unions to write to UK MPs to stop Boris Johnson from visiting India till demands are met.
17. Preet Harpal is addressed farmers.
18. Midlands Langar Seva speak at the morcha and do seva at it.
19. Delegation of 60 farmers belonging to Kisaan Majdoor Sangh, Baghpat meets Union Agriculture Minister Narendra Singh Tomar at Krishi Bhawan. Another ploy to divide farmers by govt.
20. 20,000 on route to Delhi from Uttar Pradesh after breaking through barriers.
21. NBA basketball player Satnam Singh joins the morcha. He says he is the son of a farmer and fully stands with farmers.
22. Ramzan Ali, a singer from Barnala, donates protesting farmer with new shoes at Tikri border.
23. Rahul Gandhi makes a statement in favour of farmers, but nobody cares as he is politically irrelevant.