1. Farmers watch the movie Chaar Sahibzade on open-air cinemas. Hot soup is given out by MLSS sevadaars during the movie showing.
2. Safer-e-Shaadat now being shown to farmers.
3. Farmers have blocked the Ghaziabad-Delhi Border. They moved quickly and police were unable to stop them.
4. RSS-BJP’s hardliner chief minister Yogi Adityanath started police attacking UP farmers. Pictures emerge of injured Sikhs.
5. Despite significant attacks in them Sikh farmers in Uttar Pradesh break through the police barriers.
6. Baltej Pannu, a Punjab journalist, said that so many farmers at the border are being well looked after, etc. and said the offers from abroad to send money, etc is good. However more impactful would be for NRI’s to give one year free of land rent (tekha) which will free the farmer to protest and pay off bills etc and will have a massive impact on the government
7. Modi due to address the nation on 27th December on Maan ki Baat programme.
8. Khalsa Aid set up a farmer supply storehouse called Kisaan Mall at Tikri Border.
9. Local street children do not want farmers to go. They said this is the best food they have ever had, lists of love and free schooling.
10. On Harp Farmer’s behalf Adv Hakam Singh has sent a legal notice to BJP national president, Punjab president, and state office in charge seeking an apology for “theft” of his photo and mis-using it. The notice claims his photo on BJP’s pro-Farm bills poster has lowered his image in the public eye.
11. Farmers now cut power to 4 Jio mobile telecom towers
12. “BKU is being targeted by the central authorities for evoking a massive response from Indians and NRIs,” group President Joginder Singh Ugrahan said. “What wrong is there if our supporters working as truck drivers or pursuing other labor works send donations from overseas?”
13. UK MP Tanmanjit singh Dhesi said he will reach out to Boris Johnson again before his January visit to India to convey to Modi about Farmer issues.
14. In the UK, Leamington & Warwick farmers stand in solidarity with Indian Farmers.
15. People have started making complaints against Republic TV to Ofcom. Arnab Goswami is responsible for many misrepresentations against Sikhs and farmers. They have had a £20,000 fine for a previous programme from Ofcom. You need to watch his programmes or YouTube and report his falsehoods or incitement to Ofcom. Alot of violations can lead to Republic Tv being banned in UK.
16. Congress MP attacks female journalist after he was unable to answer her questions. Sikhs support the journalist.
17. SIT has submitted its 500page report on notorious Police killer Sumedh Saini and has found him guilty under various sections like 302, 364, 201, 344, 330, 219 and 120b
18. India government pushing crony’s to come on TV to support the bills. One is Surjit bhalla, IMF India Executive Director. He is said these are rich farmers protecting abnormal profits. Farmers reacting angrily saying if we were rich we would not be sleeping in freezing cold in our trolleys.
19. Images of Jio sacks of crops emerge in Bihar.
20. 3 Sikhs won elections defeating BJP candidates in Kashmir elections.
21. Terry Milewski served with court notice as Sikh for Justice sue him.
22. Simranjit Kaur has been serving langar for 8 hours a day in Delhi. She lives in Delhi and comes everyday to morcha from 1 st day. She said she supports Jathedar Jagtar Singh Hawara snd said support the farmers do its her duty to do so.
23. We finish with the story of a poor Labourer from Bihar. He cycled 4 days to the delhi morcha. When asked what inspired him to come, he said that Guru Nanak’s Sangat is here and I want darshan of it. He left his job just to be part of this Sangat. Sikhs said they will give him a lift, he said no which getting emotional, he wants to cycle to Guru Nanak Dev ji. 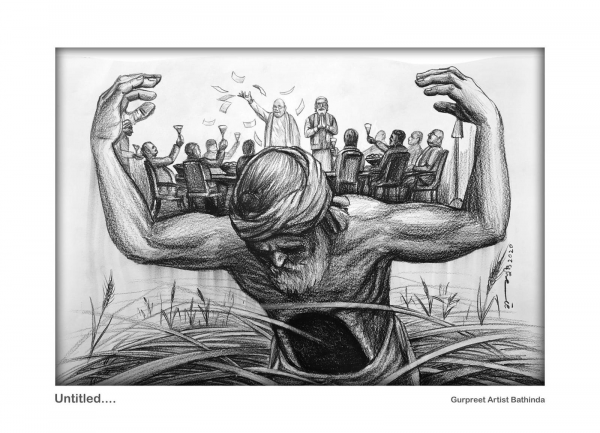