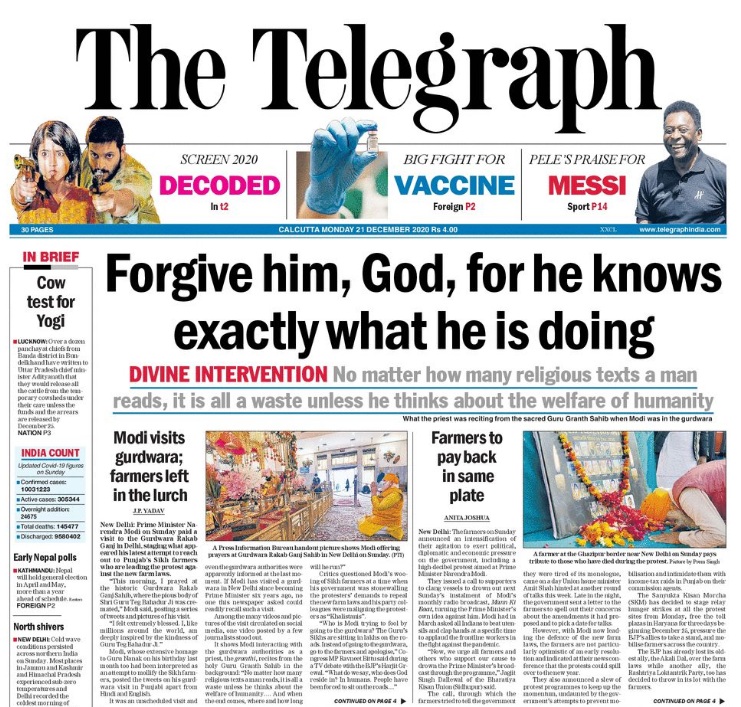 —The Telegraph, a prominent Indian English newspaper that is published mainly from Kolkata, today underlined the embarrassing moments the Prime Minister of India Narendra Modi faced during his visit to Gurdwara Rakab Ganj Sahib here.

During the surprise visit made by him on yesterday morning amid the ongoing farmers’ protests at the borders of Delhi, Modi had to listen Sikh preacher’s utterances seemed to be snubbing him inside the gurdwara.

On the basis of a viral video, this newspaper highlighted these utterances as “Divine intervention” in red bold capital letters below the headline of the page one lead. 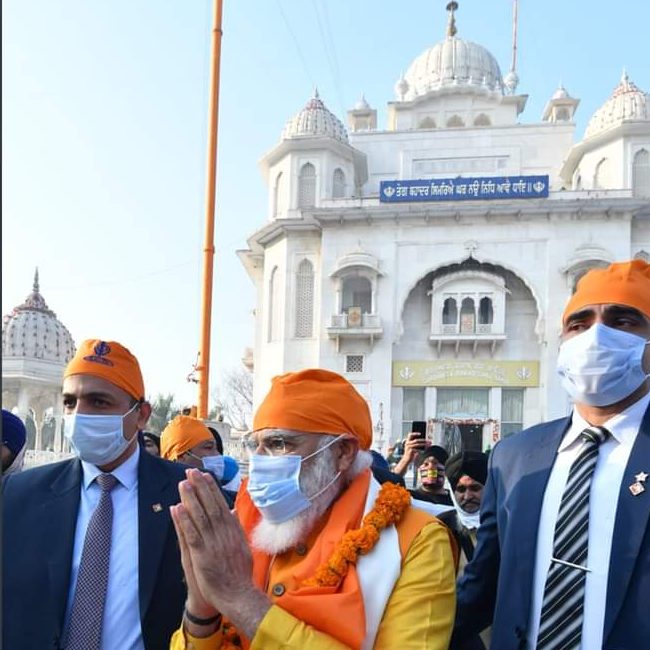 The words next to it are: “No matter how many religious texts a man reads, it is all a waste unless he thinks about the welfare of humanity”: These words are the English transcription of the interpretation made by the Sikh preacher of Gurbani (hymn of Gurus) when Modi was present inside the Gurdwara where the headless body of the ninth Guru Sri Guru Teg Bahadar was cremated in 1675.

The utterances of the Sikh preacher are given in the body of the lead story in detail a bit adding another sentence as “….And when the end comes, where and how long will he run”.

This is the only Indian mainstream newspaper that has reported this part of the story. Before it, Sikh24 reported it by transcribing and highlighting the discourse of the Sikh preacher as, “You call yourself as one who exercises religious ethos and serves the people. But your thinking has not changed with this. You have even read the religious scriptures which teach the ideology of human welfare. If you don’t adopt it and implement this in your life, none will help you during doomsday”.

As soon as the PM moved out, the preachers uttered, “Where will you run away from the trap of death which is looming over you?”

However, the video was shared widely over social media platforms with comments condemning Modi for ignoring the farmers during his New Delhi trip.

Secondly, this newspaper published pictures of Modi bowing down before Guru Granth Sahib parallel to that of a Sikh farmer who is seen bowing down before the pictures of those who died while struggling against the draconian laws introduced by his (Modi) government to pay tribute to them on the same day and in the same city. Both scenes were compared by the newspaper that is known for its pro-people editorial policy.