1. A 22-year-old Punjab farmer, Gurlabh Singh, a resident of Dayalpura Mirza village of Bathinda district, who returned from a protest site near Delhi border, has allegedly committed suicide after consuming some poisonous substance, the police said on Sunday.
2. In the last 10 days, Facebook has disabled the personal accounts of more than a dozen leading journalists in India without any warning or notice and without offering any credible reasons.
3. Some users complained of the keyword “Sikh” is blocked for Twitter Ads whereas “Hindu” is not.
4. Kisan Mazdoor Ekta now has its own YouTube channel and social media IT department. YouTube has 368,000 subscribers in 3 days.
5. Claims that Facebook and Instagram blocked Kisan Ekta morcha pages today. Allegations against Facebook to be working hand in glove with Indian companies.
6. Global CBC runs a story on shadow banning followed by Facebook, specifically mentioning the Farmer protests.
7. Farmers from Maharashtra start to build mass as they start to move towards Delhi.
8. Farmers light candles in memory of those who passed away in Morcha.
9. Lots of songs coming out about the Morcha which is inspiring the various Communities in India.
10. National Herald headline – Lies of Godi media exposed again! Those who met with PM Modi in Kutch were not farmers but BJP activists.
11. Singhu border – Tomorrow screens will be installed at the protest site so that protestors can watch what happens at the stage. Till now, the Farmer convoy is 7-8 KM long. Most farmers don’t even get to know what is happening at the stage.
12. Shahjahanpur road has now got a significant amount of farmers camping with tents now spreading.
13. Calls to boycott Ambani and Adani’s products with banners have been put up at various Kissan Camps.
14. Medical staff of different hospitals in Punjab has reached Singhu border (Delhi-Haryana border). “We’re here to support agitating farmers but we all are ready to serve if anyone falls ill,” said Harshdeep Kaur, who is working as a staff nurse at a hospital in Ludhiana.
15. Farmer leader, Jagjeet Singh Dalewal told farmers to be vigilant and calm. Dalewal told people that some anti-social elements may have infiltrated the protests. He called protestors to stay peaceful.
16. Observers say Punjab police are now in protests disguised as farmers. Their aim is to cause trouble.
17. 2 days ago, A man came and started asking Punjabi protestors whether they want to buy “Chitta.” Today, another man has been caught. Both handed over to the police. The announcement made on stage. Sevadaars think that these people wanted to paint the protestors as drug addicts.
18. For his latest photo opportunity today Modi to Guru Siri Rakab Ganj Sahib, where Sahib Siri Guru Tegh Bahadhur ji was cremated. Modi had the pics posted on his FB. Comments below included, “You are welcome to Gurdwara. Period. And that doesn’t mean that we don’t understand that this was merely a photo op and an attempt to lure farmers sitting at your doorsteps. There’s a sentence in Gurbani, the sinner or criminal bows his head twice than normal. But again welcome to Gurdwara, may your ego get healed and may you listen to the farmers and repeal the laws. “
19. Many Sikhs not happy that Modi was given a siropa. Siropas are for those who have given Kurbani for the Khalsa Panth, not a political stunt.
20. Deep Sidhu meets with Nihang Singhs this Amritvela for Vichar and Nitnem.
21. Protestors in Vancouver gather peacefully outside the house of the BJP leader.
22. Young Sikhs living abroad in Vancouver have created Team Canada and are flying out to Delhi to help in whatever way they can. #NRIsChaloDelhi
23. Sikhs protests in large numbers in Sacramento, California. Locals estimate 10,000 protestors.
24. Protests happen in Melbourne, Australia.
25. Orlando, Florida Sikhs hold a large car rally.
26. At a protest in Barcelona today, a Modi supporter showed up with the National flag. Police told him to fold the flag and leave the protest site.
27. Students from various states in India now join the farmers.
28. Farmer leader Gurnam Singh Churana responds in stage to BJP attempts to divide Punjab and Haryana over SYL canal water issue. He said if we have no lands due to these laws, what do we care about water to the lands. We are not fools and will not fall for the divide and rule policy.
29. Farmer organizations have come under the scanner for accepting donations from foreign countries. BKU ugrahan has been warned by bank officials that as the organization doesn’t have approval from the Home ministry for accepting donations from foreign countries.
30. Ruldu Singh Mansa criticized govt for raiding establishments of arhtiyas. He said that I have sent 5 member committee to Punjab. He called people to gherao offices of authorities who raided arthiyas.
31. Video emerges of elder bibian enjoying themselves playing volleyball at the morcha site.
32. Panth – Punjab project hold another webinar tonight.
33. WSO holding Delhi Challo 2 webinar – a night of artistic expression.
34. BJP leader Giriraj Singh has used abusive language towards the protesting farmers in a speech.
35. History is repeating itself. In 1906-07, S. Kishan Singh & Ajit Singh (S. Bhagat Singh’s father and uncle) assisted to build a movement against 3 farm laws brought in by British, which would make the farmer a labourer on his own land. British had to repeal all 3 laws.
36. Today we finish with Joginder Singh, 75, who fought the 1965, 1971 wars against Pakistan. He received President’s medal in 1988. Today, he says he’s fighting his 3rd war – to repeal the farm laws. 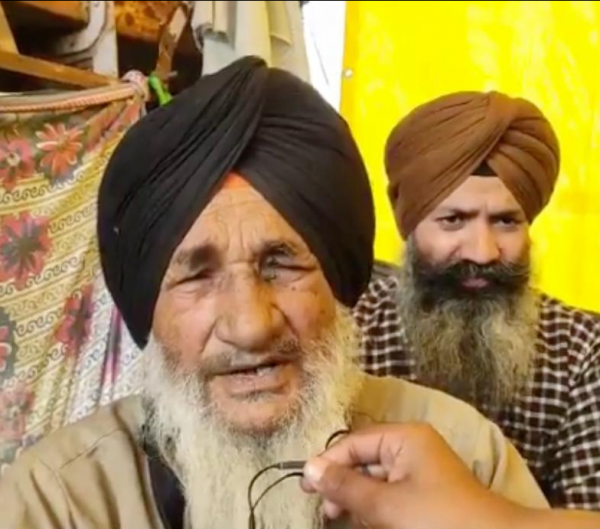