1. Today is Shaheedi Purb of Sahib Siri Guru Tegh Bahadur ji. Hundreds of bibian led Sukhmani sahib from the stage. After ardas, Degh was distributed at the morcha site.
2. Dastaars are being taught and tied to protestors who want to start wearing them.
3. Call out to all Sikh charities and those with links in Delhi. The morcha site needs more doctors and nurses due to the effects of cold temperatures on the elderly. Temperatures plunged again last night.
4. Modi now tweets in Punjabi fearing his message is not getting through. Embarrassing for the party that wants the Hindi language only policy in Punjab.
5. Modi facing a crisis as the people no longer listen to his rhetoric of better days. People from all states now riding as they see this as a unique opportunity. Now he is just reliant on RSS backing, super-rich backers, and Godi media, to remain in power.
6. Protests outside Hamleys London, on the busiest weekend of the year, as it’s owned by Ambani.
7. Large car rallies planned in many North American cities. In California, a pro-Modi group planning a counter-rally.
8. Following the protest outside Facebook California HQ, on Dec 20 the @our_avaaz Sikh-led community group will hold the second of 5 days of planned demonstrations in solidarity with the millions involved in the #FarmersProtest in India, this time outside Facebook Vancouver.
9. The protest relates to accusations of FB censoring posts that criticize India. Facebook openly has a close relationship with India & Mukesh Ambani, the Indian billionaire who is seen as one of the corporate figures looking to profit from India’s new exploitative farming laws.
10. On Thursday evening, debates on farmers’ siege of Delhi were on French TV, Russian TV and South Korean TV.
11. A blood donation camp will be organized on 21st December. A letter will be written in blood and sent to the Govt.
12. Agriculture minister Tomar gets challenged by a female farmer as he gets out of his car. He is unable to answer her questions.
13. Netarheen’ (blind) people from Punjab arrived at Singhu in support of farmers.
14. Hanuman Beniwal who is RLP chief & NDA member resigned from 3 Lok Sabha committees. The Nagpur MP will march towards Delhi with 200,000 farmers on Dec 26.
15. Haryana BJP leader Birender Singh joined protestors at Sampla in Jhajjar.
16. 3 members of BJP from Jalandhar have submitted their resignations citing that the party is misleading people with lies on-farm laws.
17. Lakha Sidhana addresses Sangat with a powerful speech. He said Modi is talking on national TV because he is rattled.
18. Lakha Sidhana calls for a boycott of Jagbani due to its false reporting.
19. Dr Sukhpreet Singh Udoke steps away from Trolly Times due to comrades’ criticism of the editorial he wrote in the first edition was centered on Sikhi. He says he is answerable to the Khalsa Panth, not them.
20. Despite some issues between communists and Panthik Sikhs, Lakha Sadhana acting like glue keeping everyone together.
21. Income tax department has started raiding homesModi Government’s Raid on Punjabi Arhityas Termed Undemocratic and Unprecedented, rice shellers, and shops of Aarthiyas. According to a report in Punjabi Tribune, Establishments of at least 20 aarthiyas have been raided
22. Khaps have decided to directly participate. They plan to block roads connecting Uttar Pradesh with Uttarakhand and Delhi on December 19 to mount pressure on the government.
23. Gujerati farmers now speak out freely at morcha after escaping house arrest by police in Gujerat. Highly embarrassing for Modi and BJP as they said held Gujerat as the model.
24. Babbu Mann addressed farmers at Singhu border.
25. Olympic boxer Virender Singh helps with langar seva at morcha.
26. Barricades have been tripled at Singhu Border
27. The Express article discusses the £100 billion post-Brexit trade deal between UK and India. This explains Boris not answering MP Tanmanjit Singh Dhesi’s question about farmers.
28. Controversial debut article in Canadian paper The National Post by Indian nationalist journalist Rupa Subramanya attacking the Sikh community. Sikh activists respond on Twitter.
29. Gurnam Singh Chaduni, BKU Chaduni “Govt is trying to divide Punjabi and Haryanvi farmers.” BJP in Haryana holds a 1-day hunger strike to try to reignite the water issue between Haryana and Punjab. Haryana youth openly now say they want Punjab and Haryana together.
30. Delhi SGPC distributes body warmers.
31. Many scenes of young men playing volleyball and cricket at the morcha.
32. Bharatiya Kisan Union-Ekta-Ugrahan (BKU-U) and Kisan Mazdoor Sangharsh Committee (KMSC) have announced that batches of farmers and farm labourers from different parts of Punjab will start moving towards Delhi so that the build-up at the borders keeps swelling.
33. Sikh Assembly & Sikh relief put up 75 more tents after the previous ones all taken up.
34. Massive bhagti happened at morcha sites with Akhand Keertan divans, nihang dals doing divans, Amrit Velas sessions with hundreds doing simran.
35. Many books stall where farmers are reading literature on Sangarsh and Punjab issues.
36. Large numbers of poor delhi residents come for langar at morcha site.
37. Political observers see that finally this morcha may break the invisibility of the Hinditva project of BJP/ RSS. More states now coming out as they see this breaking Modi rule in India. The stakes of this is now far beyond the farmers. It’s now the political future of India. Either BJP/ RSS will lose its dominance or Punjab & Haryana will lose a generation of activists. Hence, it’s essential that activists around the world keep the pressure on. 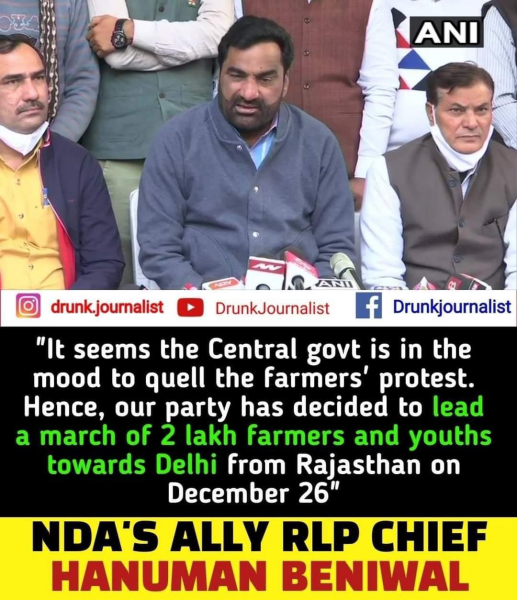