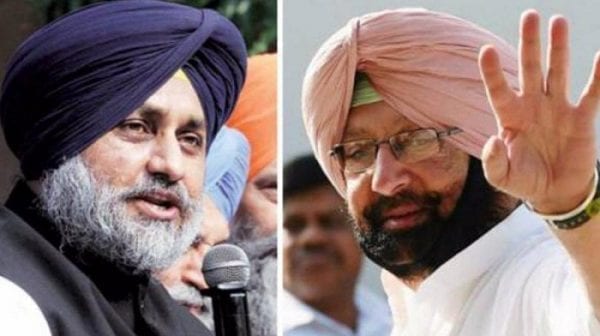 While farmers agitating against three farm laws enacted by the central government of India are fighting for their survival, leaders of major political leaders of Punjab are indulging in blame-game instead of doing anything constructive to ensure justice to the farmers.

No single day passes without the statements issued by these leaders against each other on these farm laws. However, they are not united to fight for the interests of the farmers. They criticize the central government that has introduced the “draconian” laws, less but each other more.

Punjab Chief Minister Captain Amarinder Singh is silent over the role being played by the BJP-led central government in case of resolving farm laws for the last many days, but he takes no time to issue statements to counter the allegations leveled against him on this issue.

A few days ago, a Twitter war ensued between him and his Delhi counterpart Arvind Kejriwal over the laws when the former termed a “drama” the latter’s announcement of a fast with the farmers.

Kejriwal tweeted to Amarinder saying he has been a “sewadar” of farmers and stood by them. He even accused Amarinder of “selling the farmers’ protest by having a ‘setting’ with the Centre to get his son exonerated in ED case”. Amarinder hit back at Kejriwal calling him “a coward who had run scared and apologised when cornered in a defamation case by SAD’s Bikram Majithia”.

The Shiromani Akali Dal (SAD-Badal) leaders especially its president Sukhbir Badal and his wife Harsimrat Badal are also in a verbal war with both the chief ministers.

Harsimrat fumed over Kejriwal tearing up copies of three laws in Delhi assembly. She condemned Kejriwal for “insulting” the farmer struggle with “cheap theatrics” by tearing copies of the farm laws which he was among the first to notify in the country.

Captain Amarinder Singh today said both the Aam Aadmi Party (AAP) and the Shiromani Akali Dal (SAD) were a bunch of hypocrites whose double standards on the farm laws had exposed their lack of commitment to the farmers.

“AAP and SAD MLAs never say what they mean, and vice versa,” said the Chief Minister in an informal interaction with media persons here after the launch of second phase of Punjab Smart Connect Scheme.

When his government passed Bills in the Vidhan Sabha to negate the Centre’s black farm laws, both AAP and SAD MLAs extended support, but then both the parties changed their tune to suit their political interests, said Captain Amarinder. “And now, in a bid to exploit the farmers’ agitation, they have again done a U-turn on the issue and are projecting themselves as the messiahs of the farmers, whose interests both parties had been instrumental in pawning off to the Bharatiya Janata Party (BJP),” he quipped.

The Chief Minister pointed out that while SAD was party to the introduction of the farm ordinances in the first place, the AAP government in Delhi had been quick to implement one of the draconian laws.