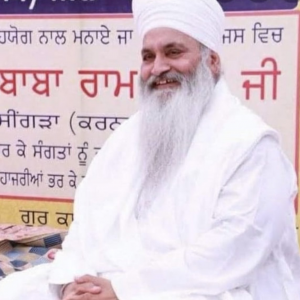 NEW DELHI—In a tragic incident, Sikh spiritual leader Baba Ram Singh today shot himself at the site of farmers’ agitation at Singhu border of Delhi in protest against the injustice by Indian government to the farmers agitating against three ‘draconian’ laws promulgated by the government. He has played a significant role in spreading Sikhi especially in Haryana, neighbouring state of Punjab.

He was participating in the agitation for the last many days. After partaking the langar today, he went to his car in which he shot himself with a gun. Found in a pool of blood, he was immediately taken to a private hospital in Sonipat where he was declared brought dead by the doctors.

Thousands of the Sikh devotees were associated with him as he was a major religious preacher and headquartered at village Singhra in Karnal district. He also left a hand written suicide note behind in GurmukhiSant Ram Singh of Singhra (Nanaksar) Gives Life in Support of Protesting Farmers, which is being examined by the Police.

Notably, he was associated to Nanaksar samprada and made key contribution to spread Sikhi in Haryana. He was very popular among the Sikh community there. It is commonly heard there saying that ‘he is preserving Sikhi in Haryana’.

He preached the teachings of Guru Sahib with the help of kirtan. He performed kirtan to spread the Sikh principles in a melodious voice. His following was not only limited to Haryana, but he was respected figures for the Sikh devotees in other countries.

Sources said he preserved land for a historic gurdwara in Ayodhya and got a multi-storeyed gurdwara building there. This is one of the best buildings of this city visited by Guru Nanak centuries ago. `

Entire Sikh community is mourning the death of such a spiritual saint. However, this act is being termed ‘supreme sacrifice’ for the cause of farmers.

Already 20 farmers participating in the agitation have died of heart attacks and road mishaps.

Reacting to the death of the Sikh saint, Sikh seminary Damdami Taksal (Mehta faction) head Baba Harnam Singh Khalsa said, “Stubborn attitude of Prime Minister Narendra Modi and his government has taken the life of Baba Ram Singh. How many more lives it will take? His act has shaken every sensitive person.”

It is noteworthy that the farmers are spending nights on the roads at Delhi borders in very tough conditions as the cold wave has gripped north India. Mercury dipped to 4.1 Celsius on December 14. Despite this, the Modi government is adamant not to meet their demands.