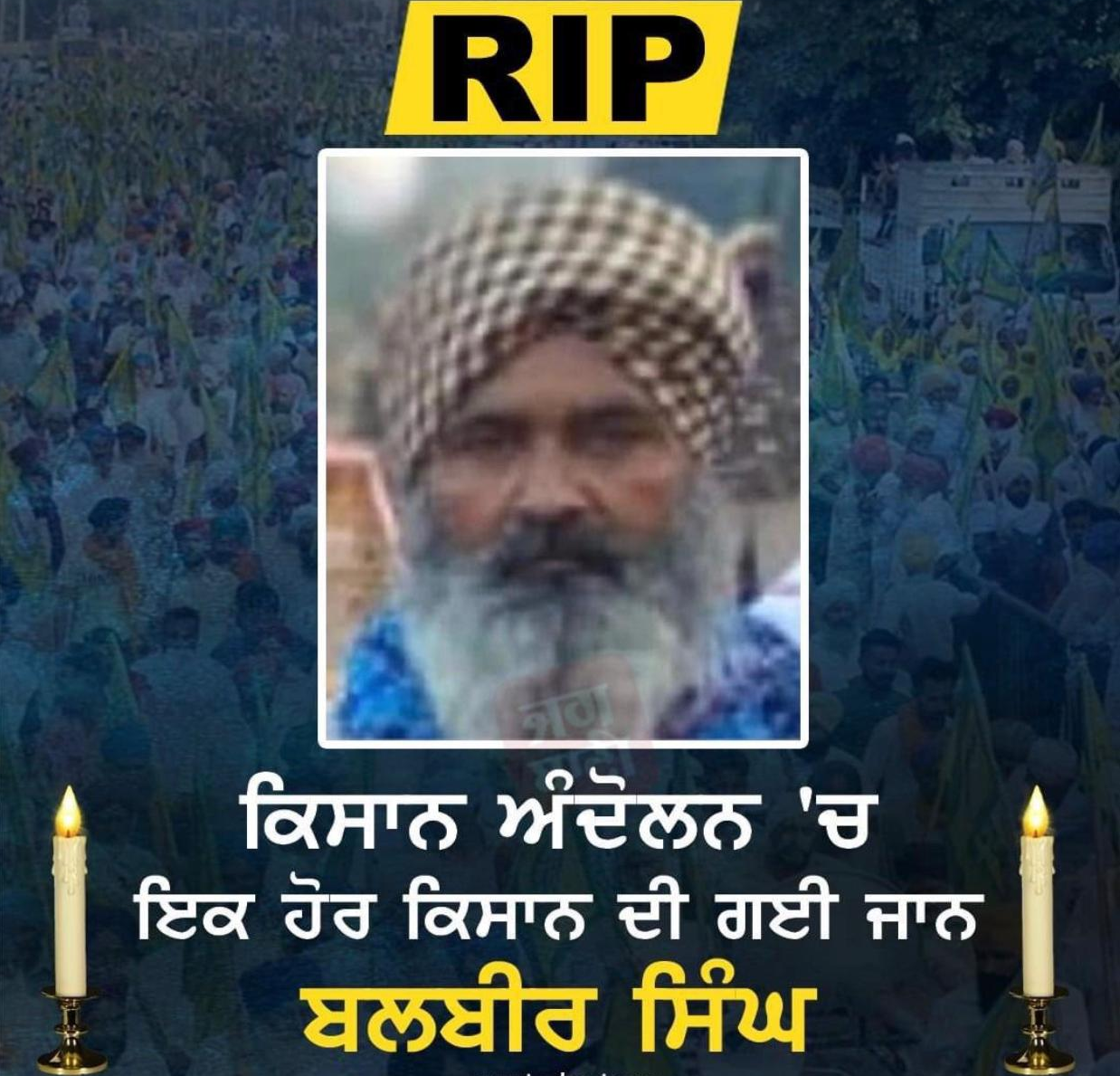 1. Sikh farmer Bhai Balbir Singh passed away today.
2. A few protestors protest outside Attila, the house of Mukesh Ambani. They were shouting slogans and had a banner. Ambani security got them, took their personal details including addresses. Then let them go later on in the day.
3. Govt is ready to play farmer vs farmer card and Punjab vs Haryana card. Yesterday, Agriculture minister Narendra Tomar met 29 farmer leaders from Haryana, but not Punjab.
4. Divide and rule policy that is trying to create is that only Punjab has an issue, but the rest of India is fine. This is far from the truth.
5. Farmers block highway 24 at Ghazipur from Delhi to UP.
6. Police were installing more barricades forcing protestors to react. Police had tied barricades with ropes, Farmers untied those barricades. Delhi Police brought huge metal containers to block the road.
7. Barricading has been increased at Tikri Border as well.
8. As Farmer unions threatened to intensify the protests, Delhi and Haryana Police have beefed up security to stop farmers from Punjab, Haryana, and Rajasthan from marching to Delhi. Tribune reports that Haryana police installed barricades at its borders with Punjab.
9. Hundreds of farmers doing Simran together at Amrit Vela.
10. Farmer leader Balbir Rajewal talked on stage against Nihangs and Nishaan sahib and caused controversy. Observers believe this was intentionally done to cause division in the morcha as Nihangs and Nishaan Sahibs have been at the morcha for many day’s so why an issue now?
11. Strong reaction in Sangat against the remarks, also online. Widespread condemnation of his remarks.
12. Dr Sukhpreet Singh Udhoke responds to the reaction to Balbir Rajewals speech stating the morcha is for all who love their lands.
13. GurBani is being recited day and night at the Budha Dal Palki Sahib which is stationed at the front lines of Kisaan Morcha at Singhu Border.
14. Lakha Sidhana tweeted to the Delhi elites questioning how long langar can be maintained at the camp. He said we have been sustaining langar for 550 years.
15. Dr Ritu Singh – we do not anymore reforms from Modi under pet names. When the population is protesting from everywhere including abroad, it’s clear they do not want these laws. Most farmers from states outside punjab and Haryana are so poor they just about get food everyday. If they could afford to, they would be in Delhi too.
16. Previously jailed for terrorism herself, BJP MP Pragya Thakur calls farmers ‘deshdrohi’, demands farmers at #FarmersProtest to be jailed
17. Facebook Inc decided not to take down content related to an extremist group Bajrang Dal fearing it might lead to attacks on its employees in India. However, it continues to censor Sikh Punjabi pages and the Farmer protest activists are changing hashtags daily.
18. Protest outside Facebook HQ in India being circulated to protest against censorship affecting the protests and issues with Ambani and Adani.
19. Dairy Milk farms of Haryana have not only extended their support to protesting farmers but also deliver fresh milk 2-3 times a day.
20. The Adani Files – https://youtu.be/BKzxSKADoOM
21. Please watch – Adani vs Farmers in Godda Jharkhand – https://youtu.be/zsJqota339E
22. The Independent – India farm protests: Mass strike intensifies as the deadlock over new laws continues
23. Dr Gurnam Singh writes an article in Asia Samachar – Punjabi Sikh farmers revolt and BJP/Hinduva corporatisation: Challenges and solutions
24. Jaskaran Sandhu of WSO writes in the Quint – Dear Indians, Here’s Why Farmers’ March Matters To Sikh Diaspora
25. 400 people demonstrate in front of the European Parliament in support of farmers in India
26. Seattle had protests in favour of the farmer.
27. Separately, Gandhi statues around the world are being defaced. The one in Washington DC was done twice, but red paint to signify blood covering it and the word racist written in it.
28. As part of the Modi propaganda machine, The Indian Railway Catering and Tourism Corporation has sent out about 20 million emails between December 8 and December 12 to its customers on 13 decisions taken by Prime Minister Narendra Modi to support the Sikh community, reported PTI. The move came amid the ongoing protests by farmers against the Centre’s agriculture laws.
29. Lastly for everyone looking for a good explanation of events so you can educate your family, relatives, workplaces and community. Please watch and share – Understand Why the Largest Peaceful Protest in History are Happening – https://youtu.be/tlrZeXunBrM