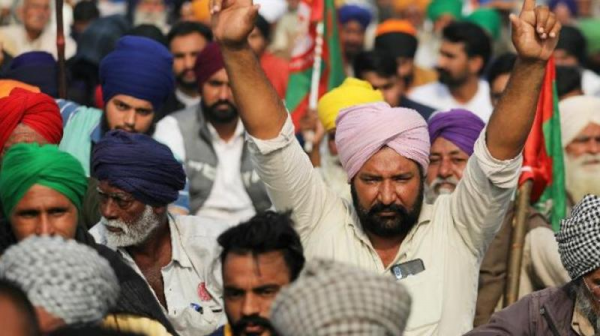 1. More than 150 Volunteers are serving as security guards at Singhu border. They spend their night keeping eye on people. They wear a green shirt inscribed with Pehredar on it. Those youngsters are doing that duty as they are afraid that govt may try to sabotage the movement.
2. “Officials from the municipal corporations have been coming to clean the site once in a while, but it is the farmers who are doing most of the cleaning,” a farmer (The Indian Express)
3. Lakha Sidhana speaks about building the pyaar of Punjab and Haryana and bringing back the greater Punjab.
4. 5500 police sent to Delhi – Jaipur road as protestors say they will block it. Farmers close the tolls making the roads free.
5. Significant demonstration outside Indian consulate, Birmingham, UK from population throughout the UK. Birmingham roads brought to a standstill.
6. BBC – Indian farmers’ car rally draws thousands to Birmingham
7. Sikhs in Northampton protest outside Guildhall.
8. Global Sikhs having to change hashtags daily due to censorship by Instagram, Facebook, and Twitter. However, Kangana Ranaut and her followers who are trying to troll Daljit Dosanjh have no issues with their hashtag.
9. World Sikh Parliament holding the Global Human Rights event tomorrow with esteemed speakers throughout the world.
10. Professor Shamika Ravi, a former member of PM’s Economic Advisory Council writes Punjab has significantly fallen behind the other states of India and not had the rapid economic growth.
11. United Sikhs hold a worldwide webinar reminding everyone, as India seems to have forgotten – “U.N Declaration of Human Rights fully endorses the right of peaceful assembly and the Right of Peaceful demonstration.
12. Hate blog: Opindia.com accuses Khalsa Aid of being terrorists because they gave elder farmers a foot massage session. 🤦‍♂️🤦‍♂️🤦‍♂️🤦‍♂️🤦‍♂️🤦‍♂️ Opindia editor before called for farmers to be shot.
13. Farmers lay siege to Reliance mall in Haryana’s Sonipat yesterday…
14. Farm Union Leaders have given up the Rail Roko Aandolan. No trains will be stopped. Rest of the program to go as planned.
15. US senator Robert Menendez writes to the Indian Ambassador to the US in support of Indian Farmers.
16. Amongst the many books to read at the morcha. The biography of Shaheed Huaman rights activist Jaswant Singh Khalra is now available.
17. Jatinder Singh from Khalsa aid Canada speaks on Canadian radio shows.
18. Indian farmers are right to be outraged – CNN Opinion by Simran Jeet Singh and Dr. Gunisha Kaur
19. BBC article covers – Why Uk protestors are supporting Indian Farmers.
20. CBC article: Farmers’ protests in India are not just about land rights. They’re about our very identity
21. Denmark and Sweden hold protests.
22. Akhand keertan continues, others parts Nihang Singh show horses and gatka, other parts people doing the Bhangra, others parts people sharing poetry, others parts people doing havan, other parts people doing namaz, other parts people in an open-air cinema watching Sikhi movies, other parts people making langar, other parts people in the gym, other parts people having foot massages. Even the most hateful Godhi media TV anchor Sudhir Chaudhry of ZeeTV had to admit that if anybody is to protest the atmosphere in this morcha is the best way to do it.