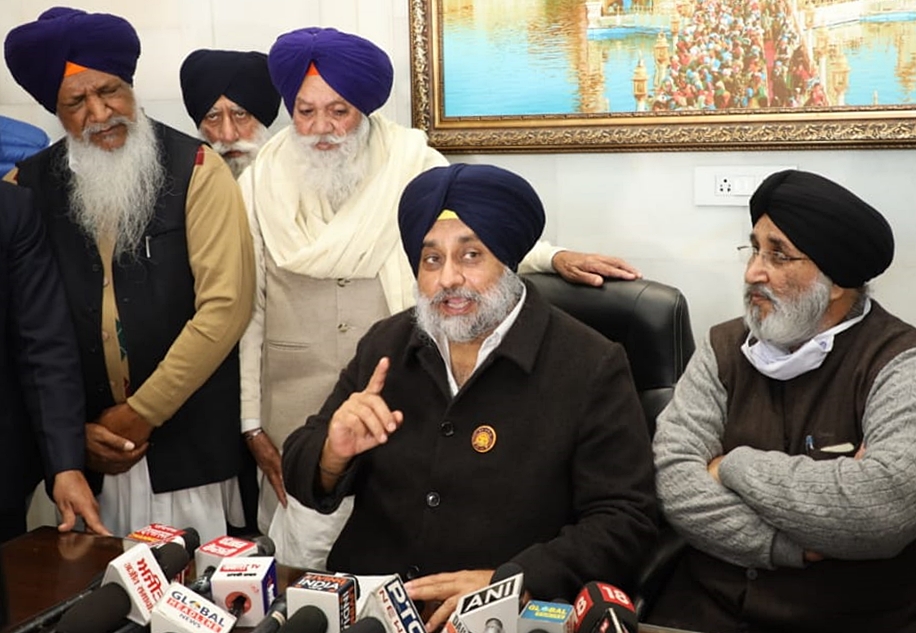 He was interacting with the media in the information office of Sri Darbar Sahib here. A newsman asked Badal twice to comment on the allegations being leveled against the union government that it is not rolling back the farm laws under the pressure of Ambani and Adani. However, Badal repeatedly said, “I don’t need to tell you this. Your media channels speak on this daily”.

Nor he directly targeted PM Narendra Modi and named BJP while taking on the union government.

In his presence, the SAD (B) today started an Akhand Path Sahib at Sri Akal Takht Sahib to mark its 100th anniversary which falls on December 14. Following which he did sewa at Jora ghar and langar hall of the holiest Sikh shrine.

Sukhbir reiterated that a conspiracy was afoot to turn the ongoing farmer agitation into a ‘dharam ki ladai’. “Agencies are plotting to defame the agitation in various ways including painting the agitating farmers as terrorists and separatists. We need to reject such forces and ensure peace and communal harmony is not disturbed in any manner”, he said.

He said, “The farmers who were agitating for their rights were nationalists and not separatists. If they were separatists or terrorists then why did the centre talk to them? Would the centre have called them ‘desh bhakt’ if they had agreed to their demands?”

Badal said chief minister Capt Amarinder Singh had come under a cloud after union minister Piyush Goyal made startling disclosures about him to visiting MPs from Punjab. “Goyal told MPs including Ravneet Bittu and Preneet Kaur that in case he revealed what the chief minister had discussed with the centre they would not be able to show their face in Punjab. Now it is incumbent on Capt Amarinder to tell what transpired between him and the centre and how he had compromised the interests of Punjab. It is clear the chief minister has backstabbed Punjab and Punjabis”.

Speaking about the three agri laws, Badal said the SAD had requested the central government to refer them when they were Bills to a Select Committee so that appropriate feedback could be taken from farmers across the country. “Unfortunately this was not done which has resulted in the present situation. I would also like to make it clear that the government by agreeing to make amendments in the three Acts has admitted that there are inherent flaws in them”, he added.