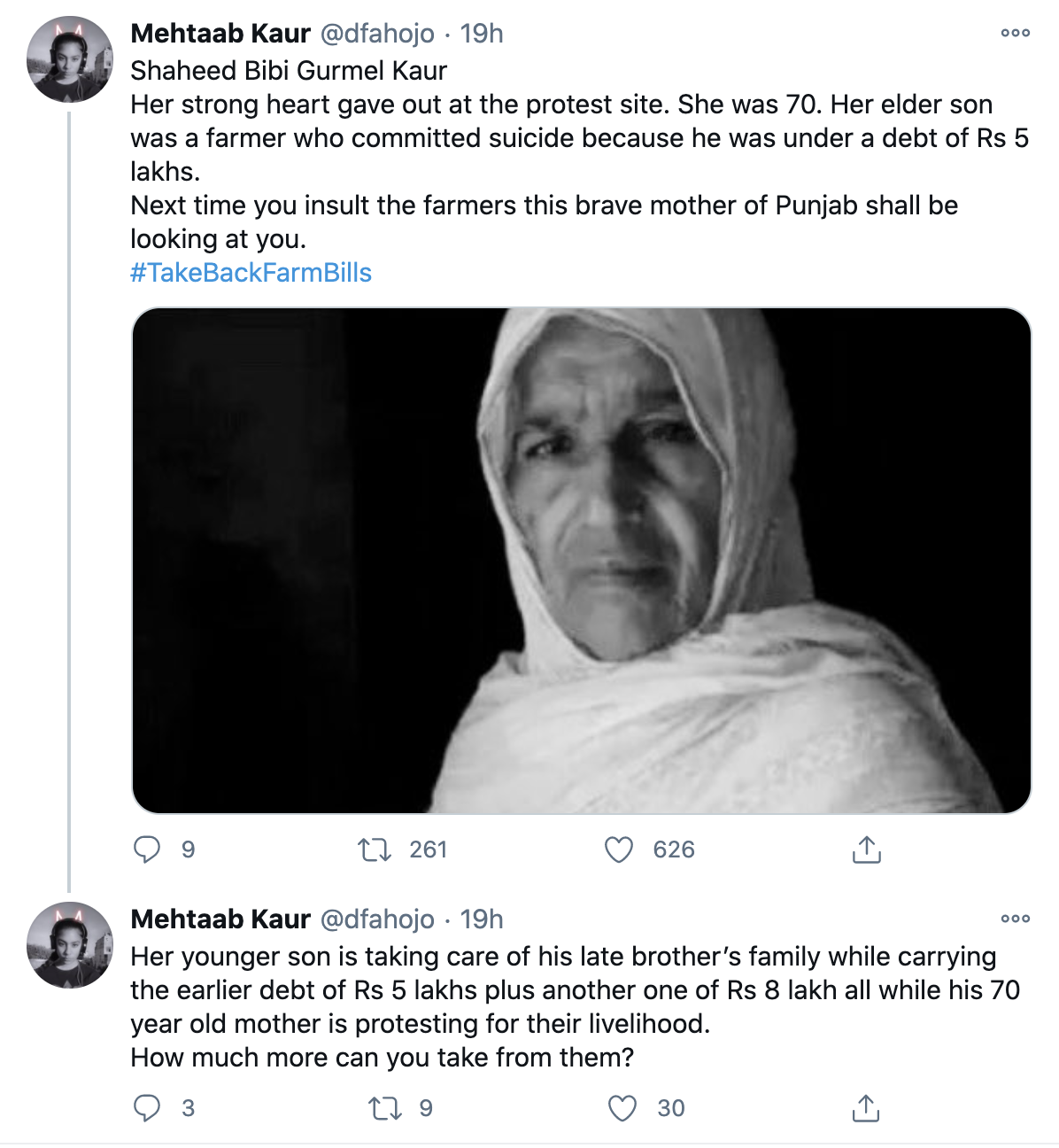 1. A 32-year-old farmer who was protesting at the Delhi-Haryana border died due to hypothermia in cold weather. The farmer was Ajay More from Sonipat. Ajay is survived by his elderly parents, wife and three children.
2. Shaheed Bibi Gurmel Kaur passed away 2 days ago at morcha. Her strong heart gave out at the protest site. She was 70. Her elder son was a farmer who committed suicide because he was under a debt of Rs 5 lakhs. Her younger son is taking care of his late brother’s family while carrying the earlier debt of Rs 5 lakhs plus another one of Rs 8 lakh all while his 70-year-old mother was protesting for their livelihood.
3. Bar Council of Delhi has written a letter to Indian Prime Minister Modi requesting for the immediate withdrawal of the 3 laws (Farm Bills) pertaining to farmers and to give an audience to the leaders of the farmers in order for an amicable solution. The letter states that the laws will invariably and substantially damage District Courts in particular and “uproot the lawyers”.
4. Ravish Kumar NDTV exposes BJP ministers inciting crowds saying farmers are agents of China and Pakistan and chanting them to be shot as anti-national traitors.
5. DSGPC condemns these comments by BJP ministers.
6. Ardas done at Sri Akal Thakht Sahib for the morcha.
7. Ravish Kumar NDTV shows a new Kanwar Grewal song about morcha which challenges Godi Media saying those who call us terrorists are scared of the vision of Guru Nanak Dev Ji. The song praises the youth of Punjab is called Jawani Zindabad.
8. Farmers are restless so start planting seeds where they are protesting on roads. They plant herbs and vegetables and say we can survive here long term if needed.
9. Deep Sidhu goes live to warn Sangat against Communist leaders misusing the protests to create a clash, so they can use it to prop up their political ambitions. He said dialogue is essential. “We need to protect the interests of Punjab not ambitions of political communist leaders” – Deep Sidhu said in a live statement.
10. Separately Deep Sidhu said we should not underestimate the govt attacking the compounds. He said nobody thought they would actually attack Sri Darbar Sahib in 1984, but it happened.
11. More pictures are shared of military trucks driving towards morcha.
12. World Sikh Parliament provides assistance to the family of Sardar Baljinder Singh who passed away on the way to the morcha.
13. EU disinformation Lab investigation is highly embarrassing the Indian govt. It shows 750 fake sites over a 15 year period. It’s the largest misinformation operation they have exposed so far. BBC article covering it was published today.
14. Earlier this year, Facebook and Google invested over $10 billion USD into Jio Platforms, a subsidiary of the Reliance company controlled by Mukesh Ambani. Valued at over $60 billion USD, Jio Platforms hopes to dominate the digital space – including streaming shows, retail, banking, groceries, and, most recently, farming. On February 4, Jio Platforms launched JioKrishi – the app for farmers. While being marketed as a way to help farmers maximize harvest & minimize losses, more likely JioKrishi will aggregate data from farms all over the country and provide real-time insights to Reliance about crop yields. Ultimately, this access and data gives Reliance an advantage in pricing and buying crops directly.
15. UK media mocks PM Boris Johnson for his response to MP Tanmanjit Singh Dhesi’s question about farmer protest. However seasoned observers consider it intentionally misdirection.
16. Tanmanjit Singh Dhesi MP tweets referring to PM Johnson as … Absolutely clueless! So disappointed with his response.
17. UK MP Joy Morrissey of Beaconsfield writes to PM Johnson about the farmers’ protests
18. Bhai Jarnail Singh Delhi calls out Kejriwal as a hypocrite. Kejriwal has never spoken for farmers at the national level but just came for the photo shoot.
19. Observers say Kejriwal’s home arrest stunt was timed to keep the national Bandh out of the headlines.
20. United Sikhs holds a virtual lobby with Punjab, UK, Canadian MPs, and Deep Sidhu.
21. BJP Organizing Secretary Dinesh Kumar now starts to try to divide and rule in Punjab, using social class. Talks of reforms to reduce the influence of farmers in Punjab.
22. Washington Post posts an Op/Ed by Burka Datt – “Protesting farmers are teaching India a hard — but much needed — lesson”. However, protestors are not happy since Datt had earlier tried to malign the farmers.
23. Gurpreet Singh Anand, of the Sikh Council speaks on Reuters TV about farmers protest and PM Johnson’s response.
24. SikhsForJustice protest outside Birmingham’s Indian embassy on #HumanRightsDay , showing solidarity with India’s #FarmersProstests.
25. World human rights day marked by many schools. Khalsa Primary School marks it with a mention of farmers’ protest. Grove Vale Primary school also joins in.
26. Kisan Rallies organized from various parts of the UK to Birmingham today and this weekend.
27. Scotland Sikhs organizing rallies.
28. Germany is holding a car rally in favour of farmers.
29. Protests happen in Amsterdam and The Hague.
30. Huffington Post covers farmer protests with interviews with WSO.
31. The Guardian has an article by Ravinder Kaur – Has Modi finally met his match in India’s farmers?
32. Video of women who are locals to protests site say they feel so much safer now that sardars are here. One said she should not have moved to Delhi, she should have moved to Punjab.
33. Panthpunjab.org has more seminars scheduled for youth.
34. Open-air cinemas set up at all protest sites showing Vismaad animations and Sahibzadey movies. Huge numbers watching these movies.
35. Abyassi Gursikhs of the Panth ask all Sikhs around the world to increase naam recitation for the morcha.
36. Mukesh and his son Akash Ambani post pictures of their newborn baby. Comments sections full of abuse and memes about sucking the blood of the poor.
37. Indian nationalists continue to show their confused mindset. Firstly they say Sikhs are Terrorists, then they say Sikhs are Hindus. Never will they say Sikhs are honest, humble, courageous, beautiful people.