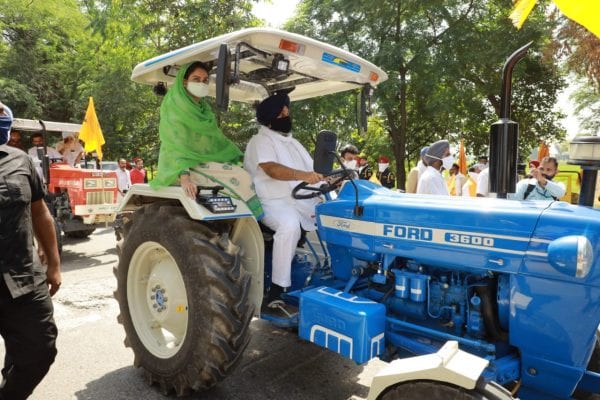 When farmers’ movement against three black laws of the Indian government is at its peak, thanks to Punjab which is making the biggest contribution in it, the Shiromani Akali Dal (SAD), known as a political party of farmers predominantly, is seen nowhere in the scene of the peasant movement. Perhaps this is happening for the first time.

Founded 100 years ago, the Akali Dal though represents Sikh community and is known as its custodian, Sikh farmers have remained its core section. It has a base mainly in the villages traditionally, inhabitants of which are mostly Sikhs.

After decolonization, Sikhs fought a big struggle against the Indian government. This struggle was concerning to the Sikh farmers directly. Stopping loot of Punjab’s river water which is basic requirement of the cultivation, and giving autonomy to the states were two major demand of the Shiromani Akali Dal (SAD) during the regimes of its presidents Master Tara Singh, ‘Sant’ Fateh Singh, ‘Sant’ Harchand Singh Longowal and Simranjit Singh Mann.

The issue of river water is most important for farmers. Without water, agriculture is not possible anywhere and rivers are major resources of water in Punjab. With this water being supplied to Haryana and Rajasthan illegally and unconstitutionally by the Centre, the Punjab which is known as the land of five rivers is getting dry gradually and moving on to become a desert. The farmers will be first to die in this would be crisis.

Autonomy is essential for the states to fulfill their local agricultural needs so that they can evolve policies in the agriculture sector to protect the interests of farmers. The Shiromani Akali Dal (SAD) fought for both demands concerning the peasants and thousands of Sikhs had to make supreme sacrifices while fighting for these demands, though the deaf and blind successive governments of India met no such demand, thereby leaving the farmers particularly in a mess.

Apart from these issues, whenever any other issue emerges, the Akali Dal turned out to be first to raise voice to get it resolved. “The party will continue to stand by its core principles of peace and communal harmony and of guarding the interests of Punjab, Punjabi in general and Sikhs and farmers in particular”, said the incumbent president of the SAD Sukhbir Badal said after withdrawing support to BJP.

When the whole Punjab especially farmers are agitating against the new laws introduced by the Centre to liberalize the farming sector, that is considered fatal for the farming community in particular, leaders of the political parties are being kept away from the agitations. Keeping other party leaders away from the agitation is understandable, but treating the Akalis in the same manner is unusual a bit.

Today, the SAD issued statements and press releases daily on this issue but not becoming part of the agitations. During the ‘Bharat Bandh’ call on December 8, Akalis were seen taking part in the demonstrations rarely. The party which led the peasant agitations once, has been barred from participating in the demonstrations.

How does such a situation arise? The clear answer is that it has no longer remained custodian of the Sikhs and farmers going by its recent record. A fresh example is supporting the laws against which the farmers are protesting these days.

Under the leadership of president Sukhbir Badal, the party first supported the laws to secure the ministry of his wife Harsimrat Badal. The party patriarch Parkash Badal also released a video to justify the laws. The farmers considered this move the party ‘betrayal’ with them. When the agitation became a movement, the Badal family came under pressure and it had to make a U-turn on the issue. It forced Harsimrat to quit as Union minister. Then, the SAD MPs had to oppose the bills related to these laws in the parliament. Having left with no option to retain alliance with the ruling BJP in centre, Badal family had to part ways with it.

All the Punjabis have clearly witnessed these flip-flops and betrayal by the SAD leadership and now they are not ready to trust this party which is celebrating its 100th foundation day on December 14 at Akal Takht Sahib, Amritsar Sahib.