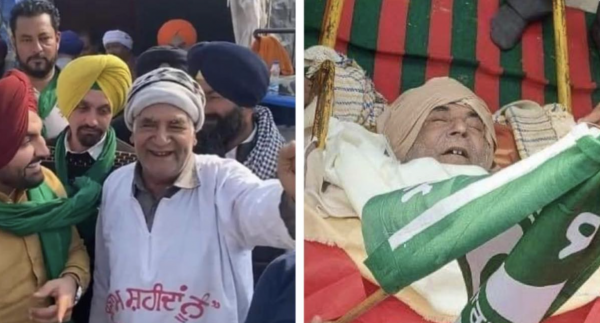 1. Two elder farmers pass away at the morcha today. Cold temperatures are taking their toll on the elderly.
2. Bharat Bandh tomorrow. Farmers aim to bring all of India to a standstill.
3. Mobile phone jammers have been brought in to stop internet coverage and phone calls around the protests. This stops those protesting from accessing updates via social media plus provides cover for the authorities to be brutal if they decide to take that step.
4. More army builds up around the morcha site.
5. Concrete barricades now put around the site which traps the farmers’ vehicles.
6. 74 yr old Mata Jee (Sarpanch) drives a tractor and trolley filled with female farmers coming to Morcha from a Pind near Goraya.
7. Global solidarity car rallies yesterday lead to a lot more TV, radio, and newspaper covering the farmer issue.
8. UK Sikhs – Twitter storm tonight at 8 pm to call out BBC for its lack of coverage. Be polite, but educational.
9. Delhi police start to build a false narrative. “Five persons apprehended following an exchange of fire in the Shakarpur area of Delhi. Two of them are from Punjab, three are from Kashmir. Weapons and other incriminating materials recovered: DCP Special Cell Pramod Kushwaha”.
10. Renowned Poet Surjit Patar returns the Padam Shri award in support of farmers’ agitation.
11. Sunny Deol tweets in favour of Modi, in a strange tweet. He distanced himself from Deep Sidhu.
12. UK Boxer Amir Khan tweets in favour of farmers.
13. Dr Sukhpreet Singh Udhoke and Bir Singh have 4-hour meeting with Bhim Sena of Haryana who agree to support Bharat Bandh.
14. Giani Pinderpal Singh speaks at the morcha.
15. Gurdas Mann has arrived at Singhu border to address farmers. He was welcomed by youngsters with Gurdas Mann murdabad slogans. Sangat did not want him to speak from stage.
16. Haryana locals demolish the helipad and tents of their Chief Minister Manohar Lal Khattar visit in Karnals Padha village where the Chief Minister was supposed to address the public meeting. Anger at his treatment of farmers.
17. Balmiki community said it will surround Amritsar airport in support of the farmers. However, this makes no sense. Idea is to surround Delhi. Maybe intentional distraction.
18. The Khalsa Aid tent for 400 farmers to sleep has CCTV and specific areas for elders and bibian.
19. Vismaad show Bhai Taru Singh movie at the morcha. Hundreds inspired by movie.
20. A team of young Singhs bring 10 washing machines to the morcha and start seva of washing clothes of farmers.
21. Sikh youth clean all the streets around the morcha and the morcha site.
22. SGPC calls on ardas at all historic Gurdwaras for the success of the morcha.
23. Athletes march towards Rahstrapati Bhawan to return awards, halted midway. Led by two-time Asian Games gold-winning former wrestler Kartar Singh of the historic pind Sursing in Tarn Taran district.
24. Sukhbir Badal makes a video in support of farmers. He says these elders should not be sitting in these freezing cold and elaborates on them while sitting comfortably at home in his garden with flowers behind him. A few months ago he has supported the laws, now he says he wants them revoked.
25. In April, Facebook invested $5.6billion into a company owned by Mukesh Ambani.
26. World Sikh Parliament helps the families of the farmers who passed away.
27. Poor children from Delhi come to the morcha for the langar. They happily mix with Farmers.
28. Scotland Kisan rally to be held on next Sunday.
29. Video of a UK metropolitan police officer trying to punch a peaceful protester. UK media is trying to locate the protester.
30. Muslim protesters do namaz at the protest while Sikhs do Rehras Sahib.
31. Akali Dal cancels its 100-year anniversary celebration in light of farmers’ morcha