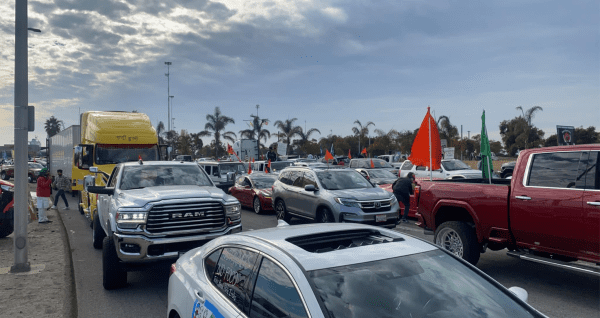 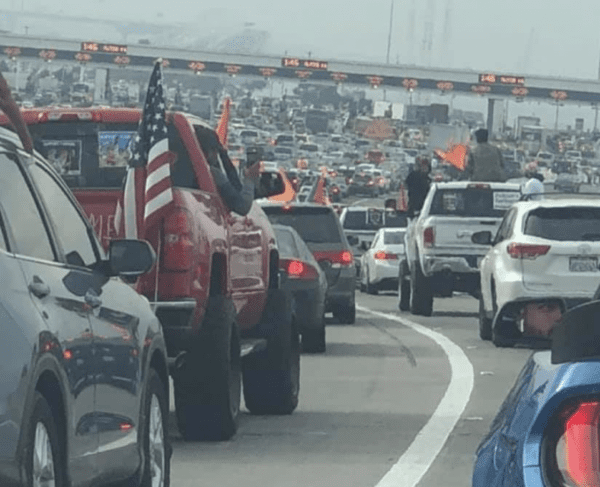 9. Washington DC – Indian consulate official said to protestors if no anti-Modi chants, then they would accept memo from protestors. Punjabi protestors chanted Modi Kuttha for the next 10 mins.
10. Vancouver downtown filled with vehicles for miles. Huge response in BC.
11. Sikhs in Toronto protesting in huge numbers in very cold temperatures.
12. Seasoned Sikh activists say we need to have the stamina for a long fight.
13. National Farmers Union Canada announced it stands in solidarity with Farmers.
14. Convoy of Indian military vehicles moving towards Delhi border caught on camera.
15. Large build-up of Police personnel close to the morcha.
16. Punjab is 94% reliant on MSP, compared to other states where it can be as low as 6%. This is because of the center govt. not allowing the industry to be created to refine the crops in Punjab. So some crops from Punjab, go to Gujerat get refined, then are sold 16 times the price that Punjab is given for them. This benefits Gujerat and multinationals at the cost of Punjab. Prior to Partition, Punjab would sell these crops in its capital Lahore which only 20 km away. But the center has never allowed Punjab to develop its own manufacturing and refining infrastructure so it has to sell its crops to govt and become reliant on them.
17. In yesterday’s negotiations, farmer leaders just said we will play no games, just say yes or no to removing laws. Then put fingers on lips for 20 mins. Indian govt’s negotiators did not know how to react. They went to get advice from high command because they thought they would have divided the farmers by now with infighting but witnessed unity.
18. Indian High Commission in London had approached Metropolitan Police to block to rally in London but failed.
19. Bar Council of India support the Bharat Bandh on 8th Dec.
20. Parmeet Singh Goldie, President, Delhi Goods transport Association has announced support for Bharat Bandh.
21. Bloomberg writes about the farmers’ morcha.
22. The Print writes an in-depth article about Punjab frustrations.
23. Workers.org writes about the morcha.
24. Ring Wing newspaper, Daily Mail in the UK covers the London protests.
25. Akhand Kirtani Jatha Keertan at morcha inspires Sangat with Gurbani kirtan. Many people from other states witness for the first time.
26. United Sikhs medical staff helping injured Sangat.
27. Khalsa aid builds a large tent for 400 Sangat to have langar at one time. Plus distribute sanitary kits for Bibian.
28. Vismaad to start screening Sikhi movies and animations at the morcha.
29. Nihang Singhs plant tall Nishan Sahibs. They have brought hawks and horses. Set up a perimeter in areas around morcha.
30. California University Sikh societies wrote in favor of the morcha.
31. Punjabis and Sikhs realize what their potential is when Badals and Capt Amrinder are not there to suffocate them.

The compilation of the latest developments from the Farmers Protest in Delhi has been taken from the Facebook wall of Bhai Jagjit Singh (UK) with the permission of the author.