NEW DELHI, India—In a shocking incident that occurred today during the wee hours, a Tamil man named Anand Ram jumped onto the Prakash Sthan (place of installing holy saroop of Sri Guru Granth Sahib) of Gurdwara Sri Bangla Sahib in Delhi. After jumping onto the Prakash Sthan, he started lying down there.

It has come to fore that Anand Ram is a resident of Pahar Ganj area of Delhi. 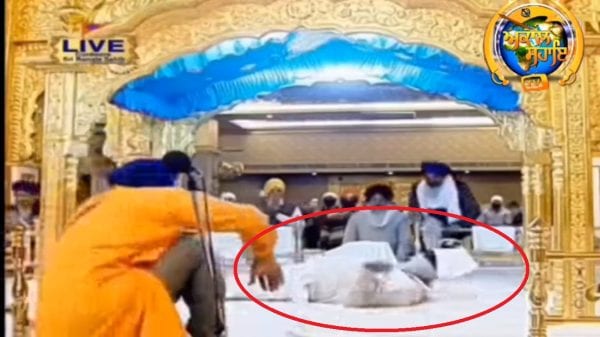 A video of this incident has gone viral over social media in which Anand Ram could be noticed trying to grab the focus of the video cameras active there for live coverage.

Fortunately, the incident occurred when Ardas was being performed before bringing the holy saroop of Sri Guru Granth Sahib Ji.

Within a few seconds, the Sikh sangat present inside Gurdwara Sahib succeeded in nabbing this unidentified person after which he was handed over to the police.

PICTORIAL: The faces behind the protest at Singhu