CHANDIGARH, Punjab—Despite the use of nutorius tactics by the BJP led Indian government to crush farmers’ struggle against draconian farm laws pertaining to procurement of farm produces, the agitation against these draconian farm laws is intensifying day by day in Punjab. While the women were always a strong force behind the protests, over the past few days Sikh24 has witnessed a massive increase in the number of women who are supporting these morchas. 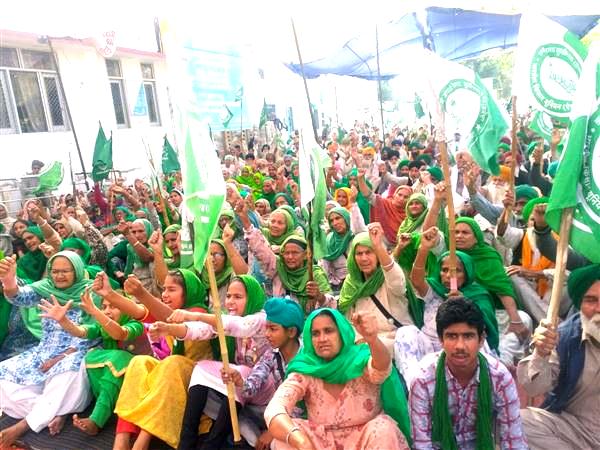 For the last few days in Punjab, scores of protests against these draconian laws are being witnessed in which the Punjabi women could be observed protesting on the roads while wearing Kesari and green Dupattas and carrying flags of farmers’ unions.

This trend is especially observable in the Malwa belt of Punjab where these women are enthusiastically organizing creating awareness about the struggle of farmers through plays, flag marches, mashaal marches, and other means.

Some of these women protesters have also vowed to join the “Delhi Chalo” call of farmers on November 26 and November 27 while expressing wish to support this struggle in every possible way.

On the call of Bharti Kisaan Union (Ugrahan), these women activist have raised awareness in more than 300 villages of 12 districts of Malwa region under “Pind Jagao Pind Hilao” campaign.

A similar trend is also observable in the Amritsar and Tarn Taran districts of Majha region where the women protesters are ready to join farmers’ march towards India’s national capital New Delhi on November 26.

This is for the first time that an agitation against the Indian government is receiving such a huge response from women in Punjab.