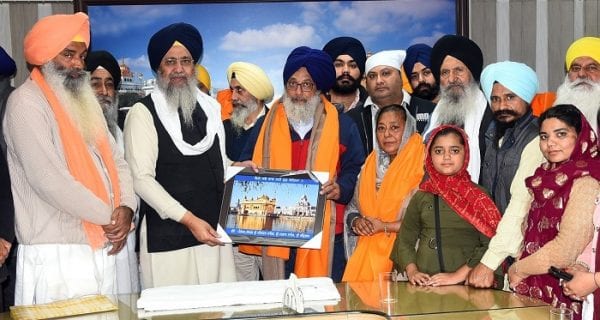 After paying obeisance inside Sri Harmandir Sahib, Bhai Daya Singh Lahoria met the SGPC president Gobind Singh Longowal who honored him and his wife with Siropaos. He was also presented a check worth INR 1,00,000 as a gesture by the SGPC.

On this occasion, SGPC president Gobind Singh Longowal said that scores of Sikh prisoners have been languishing in the Indian jails for many decades but the Indian government is not releasing them despite making an announcement to release these Sikh prisoners on the eve of the 550th Parkash Purab of Guru Nanak Sahib last year.

He demanded that all the political Sikh prisoners should be released with an immediate effect.

Earlier, Bhai Daya Singh Lahoria was released on parole for the first time in February this year to attend the marriage of his son.

Bhai Daya Singh Lahoria was extradited from the USA to India in 1997 along with his wife Bibi Kamaljit Kaur. In March-2009, he was addressed life sentence in a case pertaining to the abduction of Congress leader Ram Niwas Mridha’s son Rajinder Mridha.