CHANDIGARH, Punjab—Amid emerging outrage against the SGPC appointed officiating Akal Takht Jathedar Giani Harpreet Singh due to his totally biased speech over the issue of missing 328 holy saroops, Sikh activist Bhai Nirmal Singh aka Nimma has made a shocking revelation about the role played by the SGPC appointed Akal Takht Jathedar in the 1990’s. 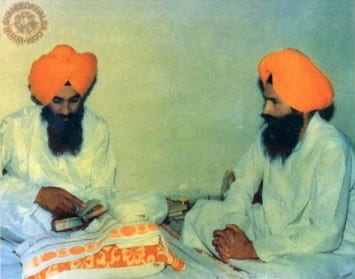 In an interview with newly launched ProPunjab TV’s founder Yadwinder Kurfew, Bhai Nirmal Singh Nimma has revealed that the great Sikh martyrs Bhai Harjinder Singh Jinda and Bhai Sukhdev Singh Sukha had approached the then Akal Takht Jathedar while demanding the service of a Sikh lawyer to legally represent their side in the Court in a better way.

“However, the then Akal Takht Jathedar refused to provide a Sikh lawyer to Bhai Harjinder Singh Jinda and Bhai Sukhdev Singh Sukha while expressing inability to afford the service fee and other expenses to be incurred in this process,” he added.

It is pertinent to note here that Bhai Nirmal Singh Nimma was a confederate of Bhai Harjinder Singh Jinda and Bhai Sukhdev Singh Sukha in carrying out the assassination of the Indian army’s General Arun Sridhar Vaidya. He was acquitted by the Court in the absence of sufficient proofs to prove his involvement in this action while Bhai Jinda and Bhai Sukha had confessed their act before the Court while apprising the judge with Sikh sentiments.

The shocking revelation made by Bhai Nirmal Singh Nimma has proved that the SGPC appointed Akal Takht Jathedar never served the Sikh interests.

Currently, the SGPC has installed the portraits of Bhai Harjinder Singh Jinda and Bhai Sukhdev Singh Sukha in the Central Sikh Museum after declaring them great martyrs of the Sikh community.

On October 9 every year, the SGPC also organizes a religious function inside Sri Darbar Sahib to mark the martyrdom anniversary of these two great martyrs.

In this interview, Bhai Nirmal Singh Nimma refused to cite the name of that Jathedar publically while saying that he will reveal his name soon. However, he has indicated that the above said Jathedar is still alive.