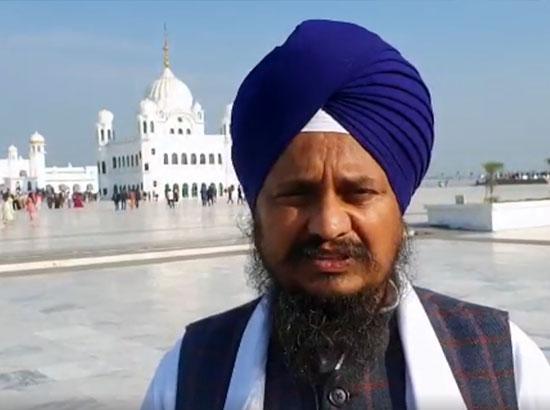 AMRITSAR SAHIB, Punjab—Speaking on the first anniversary of the opening of the Kartarpur Sahib corridor, Giani Harpreet Singh, SGPC-appointed acting Jathedar of Akal Takht Sahib, today asked the Indian government to demonstrate generosity like its counterpart in Pakistan by reopening the corridor which is closed for the last eight-month from the Indian side.

While Pakistan has already reopened the corridor, India is keeping it close citing the COVID-19 outbreak.

Reacting to this, the acting Jathedar said, “When all the religious places have been reopened, no reason stands behind not reopening the corridor. Pakistan reopened it showing open-heartedness. India should also do so at the earliest possible.”

“The corridor is proving to be a milestone to ensure peace in the Asian region. People of both India and Pakistan aspire for peace. But to my mind, internal politics in both countries become a hurdle in this way. It should not be done. If both the countries really like to ensure peace, the Kartarpur corridor is a better alternative for them”.

He said, “The devotees are desperate to visit the final resting place of Guru Nanak Sahib. So, the Indian government should lift restrictions over the corridor. Not only Sikhs, but followers of other religions in India are also willing to visit Kartarpur Sahib. It has become necessary as Guru Nanak Sahib’s birth anniversary is coming closer”.

“Thanks to Indian media, distrust is prevailing between people of both countries. When they will get together at the gurdwara Sahib, the distrust will over”, he said.

He divulged that “Pakistan government has proposed to build a highway from Kartarpur Sahib to Nankana Sahib, the birthplace of Guru Nanak so that the pilgrims visiting Kartarpur Sahib can also pay obeisance at Nankana Sahib. If this project is finalized, it will be another good step for us”.

Gurdwara Kartarpur Sahib is the last resting place of Guru Nanak Sahib, and situated in Pakistan. The corridor provides His followers in Indian Union a visa-free access to this holy place land of which was tilled by Guru Sahib for His last 18 years.

A long-pending demand of the Sikh community living in the Indian Union, the corridor was opened on 550th birth anniversary of Guru Nanak Sahib last year by Pakistan in agreement with India. This is a trans-border link between the gurdwara and another historic Sikh town Dera Baba Nanak, which is situated along the border in the state of Punjab.

However, the Indian government is adamant to keep the pilgrimage suspended citing Covid-19 protocol, despite it allowed to reopen the worship places in the country several weeks ago.