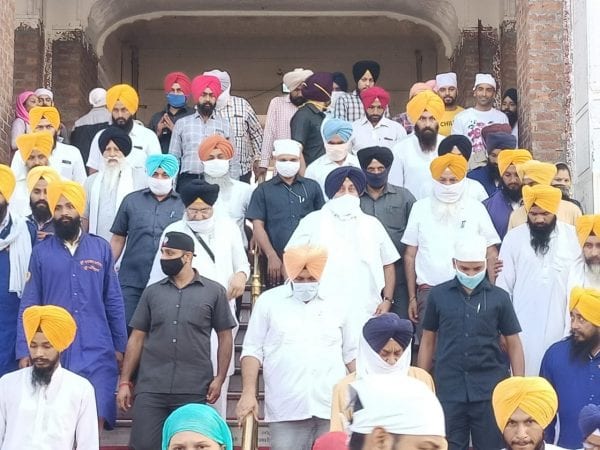 He along with his family members including his wife Harsimrat Kaur Badal were here to pay obeisance at Sri Harmandar Sahib and attend the bhog of monthly Akhand Patth (48-hour long nonstop recitation of Guru Granth Sahib) held by him on the premises of Sri Harmandar Sahib.

Accompanied by the SGPC president Gobind Singh Longowal, he entered the secretariat of the highest Sikh temporal seat, where he met Giani Harpreet Singh for half an hour. The meeting was closed-door and none could have the clue about the conversation that took place in the meeting among the trio.

However, it is being guessed that Sukhbir and Longowal have met him in wake of Centre’s step of appointing Justice SS Saron (retd) as Chief Commissioner, Gurdwara Elections. The BJP-led centre filled this vacancy a few days after SAD (B) snapped ties with BJP over anti-farmer laws. The possibility has emerged out of the appointment that the Centre would conduct these long-standing elections soon.

In fact, the SAD (B) needs the support of all quarters of Sikh community at the time when it is passing through its worst phase in terms of reputation, credibility, and image. It never faced such a situation in its 100-year history. Controlled by it, the SGPC is facing backlash on several issues including that of missing 328 holy saroops of Guru Granth Sahib. In such a situation, it will not be easy for the SAD (B) to retain its overall victory in the SGPC polls and Sukhbir may have sought extra support from the jathedar.

Some sources said that the SAD and SGPC want to settle the issue of missing saroops as this one is turning out to be biggest headache for it especially when the Sikh bodies are undertaking indefinite morcha outside Teja Singh Samundri Hall, the head office of the SGPC on the premises of Sri Harmandar Sahib, over this issue against the gurdwara body. They want the morcha that causes embarrassment for the SGPC in front of devotees, to be lifted in any way.

Pertinently, the Sikh bodies demonstrated against Sukhbir outside the shrine complex during his visit.

“For the last 100 years, the Sikhs have expressed faith in the SAD. They will do so once again,” said Sukhbir while interacting with the media later on.