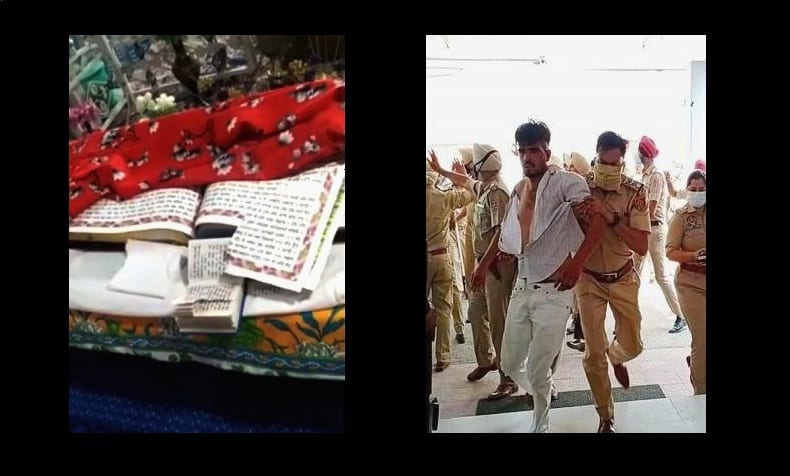 AMRITSAR SAHIB, Punjab—Taking serious note of another sacrilege of Guru Granth Sahib, that occurred in two villages of Fatehgarh Sahib district today, Giani Harpreet Singh, the SGPC-appointed acting jathedar of Akal Takht, said, this is deep-rooted conspiracy which is similar to one hatched in 2015 to commit sacrilege in Bargari village of Faridkot.

The fresh sacrilege has taken place in village Jalla and Takhan Majra in Fatehgarh Sahib district. “I am surprised that when Bargari sacrilege took place, the farmers were agitating for pressing their demands and undertaking morchas on railway tracks. Same thing is happening now. When the farmers are upping the ante against the farm laws of Centre and their movement has reached on its peak, another sacrilege has been committed”, said the jathedar in a video message.

He said, “Though, the culprits have been arrested, but conspiracy which seems very big, must be unearthed to trace the hands behind the arrested person”.

“To my mind this condemnable act may be a conspiracy to derail the farmers’ stir. If the state government or its Police have no competence to punish the culprits as it showed in previous many such cases, they should hand over the arrested person to sangat. Khalsa Panth is competent to punish him”, he said.

He further said, “The person who committed the sacrilege, was asking the people to call the Police to arrest him. Keeping in view of this, I apprehend that he may be declared mentally sick by the Police. This has occurred in previous many such cases. This kind of offense cannot be committed by any mentally ill person. He looked well”.

Will conduct a fair and transparent inquiry to probe both incidents: Police

After villagers handed the culprits over to the Police, a spokesperson of Punjab police said a case has been registered FIR no. 294 dated 12.10.2020 at PS Sirhind, on the statement of Manjot Singh of village Tarkhan Majra, Sewadar of Gurdwara Sahib.

He added that on the statement of complainant Manjot Singh, an unknown person driving a Swift car PB-34-7277, came to the village and entered the Gurdwara Sahib on the pretext of paying obeisance, but committed sacrilege of Sri Guru Granth Sahib ji. He, along with his father, overpowered him and raised an alarm. In the meanwhile, some residents assembled on the spot and informed the police. Senior police officials reached the spot immediately and took custody of the accused.

The spokesperson informed that the accused has been identified as Sehajvir Singh (aged 19 years) resident of Nabha. His personal search yielded a prescription slip from a Patiala hospital, where he was undergoing drug de-addiction treatment for the last one year. The accused has been identified by his father, who was also brought to the spot, after receiving information about the blasphemous act of his son.

He added that during preliminary investigations, the accused has disclosed that before committing this horrific crime, he had also committed a similar incident in the morning in a nearby village Jalla, Fatehgarh Sahib district.

He informed that ADGP Law & Order Ishwar Singh, IGP Rupnagar Amit Prasad, IGP Patiala Jatinder Singh Aulakh, SSP Fatehgarh Sahib Amneet Kondal and other senior officers have visited the spot and ordered a thorough and open investigation to be conducted in a transparent and impartial manner in association with the SGPC and the members of the Satkar committee.