Akal Takht Sahib: Ahead of Gurpurbs, India should lift suspension on pilgrimage through Kartarpur Sahib corridor 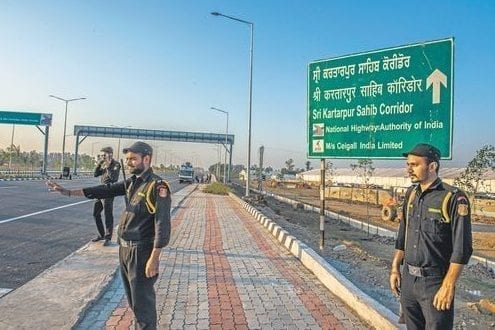 AMRITSAR SAHIB—Giani Harpreet Singh, the SGPC-appointed acting Jathedar of Akal Takht Sahib, today stated that the Indian government should lift suspension on the pilgrimage through Kartarpur corridor ahead of several important Gurpurbs that fall in the coming weeks.

While interacting with the media at the secretariat of Takht Sahib, he asked, “If the union government of India has reopened all the worship places in the country on condition of following COVID-19 guidelines issued by the health department, why is it not reopening the corridor?”

“Several important Gurpurbs such as 551th Parkash Gurpurb (birth anniversary) of Guru Nanak Sahib, Bandi Chhod Diwas and Parkash Gurpurb of fourth Guru Sri Guru Ramdas Sahib fall in the coming weeks. Sentiments of the Sikhs are associated with these Gurpurbs and they always want to celebrate these days in the gurdwaras. In wake of this, the corridor should be opened from India side, so that the Sikhs are able to pay obeisance at Kartarpur Sahib on these sacred occasions,” he added.

His statement comes days after the Pakistan government issued a notification reopening the Gurdwara Darbar Sahib, Kartarpur Sahib, and the corridor in every respect in wake of sizable improvement in the situation of COVID-19 outbreak.

The historic gurdwara is the last resting place of Guru Nanak Sahib, founder of the Sikhi, and situated in Pakistan. The corridor provides His followers in Indian Union a visa-free access to this holy place land of which was tilled by Guru Sahib for His last 18 years.

A long-pending demand of the Sikh community living in Indian Union, the corridor was opened on 550th birth anniversary of Guru Nanak Sahib last year by Pakistan in agreement with India. This is a trans-border link between the gurdwara and another historic Sikh town Dera Baba Nanak, which is situated along the border in the state of Punjab.

However, Indian government is adamant to keep the pilgrimage suspended citing COVID-19 protocol, despite it allowed to reopen the worship places in the country several weeks ago.