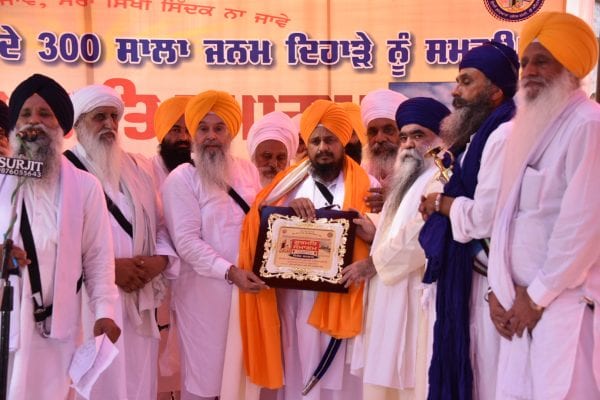 TARN TARAN, Punjab—To commemorate the great Sikh martyr Bhai Taru Singh who chose martydom instead of compromising Sikhi in 1745, on his 300th birth anniversary, a large scale program was organized today at his native village Poohla on large scale.

In presence of a large number of devotees, the Sikh preachers put light on the life events of Bhai Sahib, besides remembering his contribution made to the Sikhi in the turbulent times when Sikhs were being persecuted by the cruel Mughal rulers.

Paying tribute to the great martyr, Giani Harpreet Singh, SGPC-appointed acting jathedar of Akal Takht Sahib, said life of Bhai Taru Singh was a source of inspiration for the Sikh society and preached them to live with high spirit even in bad times. “The Sikh youths should set their direction by following the deeds done by their great martyrs”, he said.

Expressing concern over the Sikhs who are embracing Christianity after being lured by its missionaries with unethical and unfair methods, the acting jathedar said it was unfortunate that the people whose ancestors set unique examples of martyrdom in the world for their religious commitments are getting lured to leave their religion.

Meanwhile, Indian PM Narendra Modi also paid tribute to the Sikh martyr in a tweet. He said, Bhai Taru Singh’s name will always be synonymous with “courage and fearlessness.”

“On the special occasion of his 300th birth anniversary, I bow to the great Bhai Taru Singh Ji. His name will always be synonymous with courage and fearlessness. Always proud of his culture as well as ethos, he never bowed to injustice. He continues to inspire millions,” The Prime Minister tweeted.

Bhai Taru Singh is remembered for making a unique sacrifice in the Sikh history.

After being arrested, Bhai Taru Singh was brought before Zakriya Khan, governor of Punjab and based in Lahore, and given the choice of converting to Islam or being executed. As a symbol of his conversion, Singh would have to cut off his hair and present it as an offering to the Khan. Upon his refusal, and in a public display, Bhai Taru Singh’s scalp was cut away from his skull with a sharp knife to prevent his hair from ever growing back. This torturous act is believed to be carried out on 9th June 1745.