CHANDIGARH, Punjab—SGPC president Gobind Singh Longowal, who is facing Sikh ire for his irresponsible behavior in bringing the culprits responsible for missing saroops to justice, has now claimed that he had brought forward this sensitive issue. He has said that he has apologized for this incident while recognizing his moral responsibility despite the fact that this incident didn’t occur during his tenure. 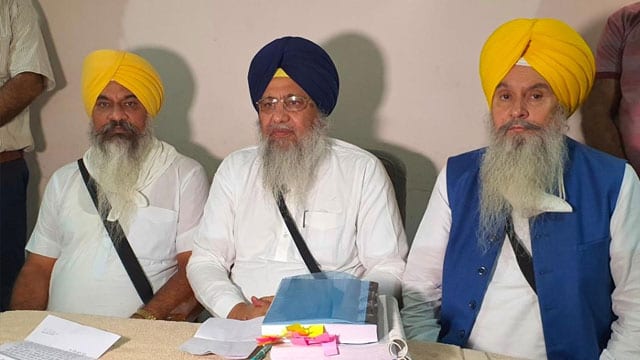 “The SGPC has sincerely taken strict action against the responsible employees by terminating and suspending them as per their role exposed by the investigation committee of Sikh intellectual Ishar Singh,” he maintained.

Longowal further said that the probing panel has been probing this incident with full sincerity and the Sikh protesters should stop politicizing this issue.

The issue of missing saroops had come to fore in June this year when an assistant supervisor Kanwaljit Singh had retired from the publishing department of SGPC. Initially, 268 saroops were reported missing but later the investigation committee led by Ishar Singh had found 328 saroops missing.

It is pertinent to note here that the SGPC is facing sharp Sikh outrage for not taking action against its employees responsible for the missing 328 saroops of Sri Guru Granth Sahib Ji from its Gurdwara Ramsar Sahib based publishing house. Further, the SGPC is also continuously refusing to publicize the full report of Akal Takht appointed Ishar Singh led investigation committee.

Scores of Sikh activists belonging to various Sikh organizations have been continuously staging a protest within Sri Darbar Sahib complex since September 14.

On September 15, SGPC had tried to disperse the protesters through violent means by letting its brigade of hooligans attack peacefully protesting Sikh activists but all went in vain.