NEW DELHI, India—S. Khajinder Singh Khurana, a prominent activist who worked tirelessly to relocate Afghani Sikh and Hindu families out of Afghanistan passed away yesterday due to cardiac arrest. Khajinder Singh was a very respectful member of the Sikh community and held in great regard by both Sikh and Hindu Afghani communities.

Although today, the SGPC, DSGPC, and even BJP are taking credit for settling Afghani families in India, those who have already migrated to India in the past three months give credit to the hard work of Khajinder Singh.

After the attack on the Kabul Gurdwara Sahib in March earlier this year, S. Khajinder Singh was swift to get in touch with the families in Afghanistan. He worked with a handful of his colleagues to chalk out the entire strategy. At the same time, the World Sikh Organization and the Manmeet Singh Bhullar Foundation were trying to sponsor the Afghani Sikh and Hindu families to migrate to Canada, however, due to the process being slow, and considering the dire circumstances that were facing these families, Khajinder Singh worked tirelessly day and night to settle these families in India.

S. Khajinder Singh authored a Punjabi book on the history of Afghan Sikhs and Hindus.

Khajinder Singh was closely related to S. Jai Singh Fani and Gajinder Singh, the former Afghan Sikh MPs. He fled the Afghan civil war to India in the early 1990s. In India, he set up the Afghan Hindu and Sikh Welfare Society dealing visa and other issues faced by the first wave of Afghan refugees in India.

Speaking with Sikh24 earlier in June this year, S. Khajinder Singh said he appreciated efforts by the DSGMC in providing accommodations to the Afghani refugees but he said a lot more needs to be done to help these families. He called upon the SGPC and DSGMC to be honest if they wanted to help these families. His concern was that the SGPC had expressed interest in supporting these families financially, but hey had not made any communication with Afghani Sikh leaders.

Before his passing away, S. Khajinder Singh was working on permanently settling these families in rental houses after their quarantine period was over. A few families had already been settled in rental houses in and around New Delhi. All of this was possible with the hard work of S. Khajinder Singh and his team of volunteers as the DSGMC and SGPC failed to provide a long term strategy for the settlement of these families. 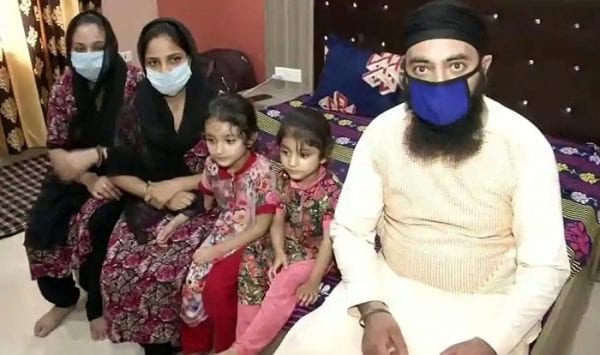 At the time when Sikh24 last spoke with S. Khajinder Singh, around 200 Afghan Sikh families were living in the serais (rest houses) of prominent Sikh shrines in India’s national capital New Delhi. 138 persons had been accommodated in 31 rooms of Gurdwara Motibagh’s rest house which means that averagely 4-5 Afghan Sikhs were forced to live in a single room meant for two adults only. He said this was the best that could be done considering there was no financial support from any organization for this project. He said even this would not have been possible without the support of the DSGMC, especially Majinder Singh Sira.

“Although, the Indian government has saved our lives by evacuating us from Afghanistan but now we have a big challenge in front of us to bring our lives back on track. We have left our properties and businesses in Afghanistan and here we are standing as penniless so the Indian government must take into consideration the needs of our lives,” an evacuated Afghan Sikh told Sikh24 after settling down in India.