Two Sikhs were injured and turbans of some demonstrating Sikhs were tossed by the SGPC task force in this violent attack. 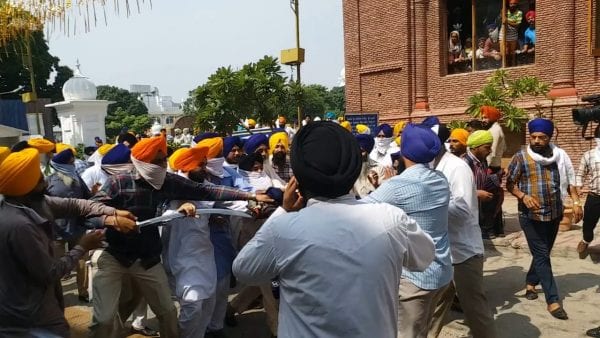 The Sikh activists owing allegiance to various Sikh bodies including Guru Granth Sahib Satkar Committee launched indefinite Morcha (agitation) on Monday (September 14) against the apex gurdwara body demanding that criminal cases should be filed against its staffers indicated in the report of inquiry ordered by Akal Takht Sahib and the Sikh masses should be told where these missing saroops are. 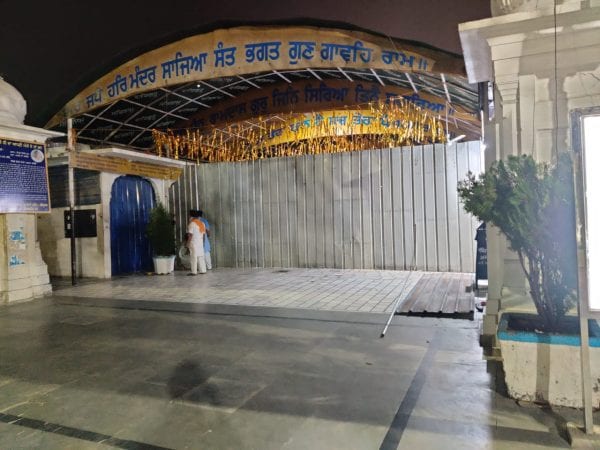 As the Morcha entered day 2, more sangat started to join. However, the SGPC isolated the agitation site that was the main gate of the SGPC’s headquarters Teja Singh Samundri Hall, by raising iron walls with the height of 12 feet. Doing so, it blocked one of the major entrances of the holiest Sikh shrine for the sangat as well. Of the total three walls, one wall was raised at Gurdwara Baba Atal Rai Sahib, other was near Langar Hall. The third was raised on the entrance of Manji Sahib Diwan Hall side.

Unable to take part in the stir, the Sikhs sat along one of the walls raised near Langar hall. Thus, another site of demonstration emerged that irked the SGPC. While attacking the Sikhs chanting “Satnam Waheguru” peacefully, the task force members snatched sticks from their hands and attacked them with these sticks. In the attack, two demonstrators were injured.

The Sikh agitators were not alone who became their target but the journalists covering the agitation were also assaulted by the SGPC personnel. They thrashed a cameraman of a news channel and broke his camera in an attempt to stop them from shooting a scene of their activity which is being dubbed as “hooliganism” by all.

As the incident took place, its video clips and photographs went viral on social media and criticism of the SGPC was intensified by the members of the Sikh community. The SGPC did not seem to have learned any lesson from the general reaction to this incident condemned by all and in a statement termed the peaceful agitators “miscreants” and cited that “they have come to vitiate the spiritual atmosphere of Sri Harmandar Sahib”.

The sangat visiting the shrine is facing inconvenience due to the walls raised to isolate the agitators, but the SGPC is adamant to not remove them yet.