CHANDIGARH, Punjab—Finally, the Mohali Court has issued a non-bailable arrest warrant against the former Punjab DGP Sumedh Saini in Balwant Singh Multani abduction and murder case dating back to December 1991. In this non-bailable warrant issued by the Court of Judicial Magistrate First Class Ravtesh Inderjeet Singh, the SHO of Mataur police station has been directed to produce Sumedh Saini by September 25. 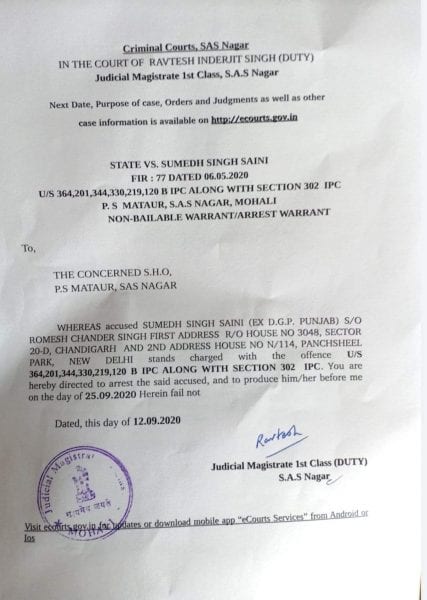 This non-bailable warrant against Sumedh Saini comes a day after he approached Supreme Court seeking anticipatory bail. Earlier, his anticipatory bail plea was rejected by the Punjab & Haryana High Court.

At present, Saini’s whereabouts are unknown and the Punjab police have also failed to trace him despite conducting raids at his residences in Hoshiarpur, Chandigarh, and New Delhi.