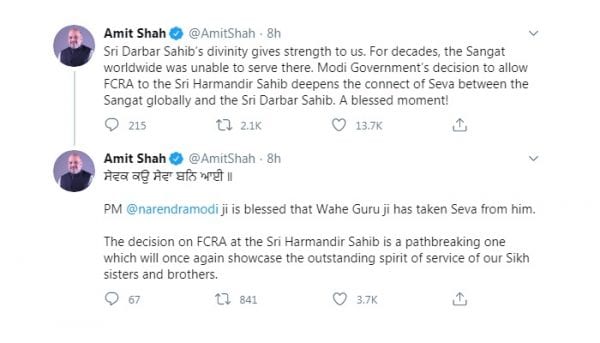 With this, the SGPC will now be able to receive donations from worldwide Sikhs directly into the account pertaining to ‘Sachkhand Sri Harmandir Saheb Sri Darbar Saheb Punjab Association’.

“The decision on FCRA at the Sri Harmandir Sahib is a pathbreaking one which will once again showcase the outstanding spirit of service of our Sikh sisters and brothers,” Indian Home Minister Amit Shah tweeted while sharing the development.

It is pertinent to note here that the Indian government keeps a thorough watch over the entities which are permitted to receive donations from foreign countries after getting registered under FCRA.

Internationally, the United States of America and Germany have been openly opposing the Indian government due to its “arbitrary actions” of banning human rights and pro-environment bodies using the powers under this act.

:dateline:First time ever after the opening of Kartarpur Sahib corridor, Joti Jot (immersion in the eternal light) Gurpurb of Guru Nanak Sahib, founder of...
Read more