NEW DELHI, India—On September 3, 182 Afghan Sikh and Hindus landed at Indira Gandhi International Airport of India’s capital New Delhi in a special private plane. This is the third batch of Afghan Sikhs and Hindus being brought back to India due to the rising persecution of minorities in Afghanistan. 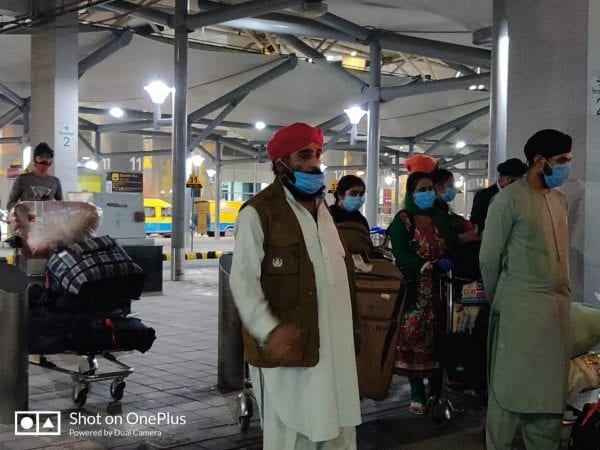 7 Holy Saroops of Sri Guru Granth Sahib Ji were also brought back to India in this private plane.

All these Afghan Sikhs and Hindus were warmly welcomed on their arrival at the Airport by the Delhi Sikh Gurdwara Management Committee and the World Punjabi Organization.

Interacting with media, DSGMC president Manjinder Singh Sirsa said that the DSGMC will look after the needs of all these Afghan Sikhs and Hindus. “We are committed to help them till their full rehabilitation in India like normal citizens,” he added.

“As promised by the Union Home Minister Amit Shah, we have assured all these Afghan Sikhs and Hindus that they will be given citizenship in India,” he maintained.

Earlier, the SGPC had also promised financial assistance for the Afghani Sikh and Hindu families, however, to date no support has been provided by them.

It may be recalled here that the assailants affiliated to ISKP had shot dead 25 Sikhs in Gurdwara Sri Guru Har Rai Ji situated in Afghanistan’s capital city Kabul on March 25 this year. After this incident, the Sikhs were threatened to quit Afghanistan or get ready to be killed.