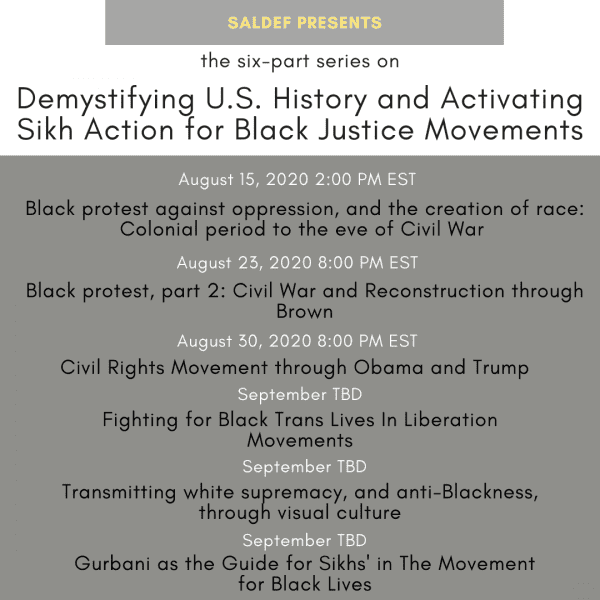 Part I of the series starting on August 15 will include a presentation on Colonial Uprisings and The Creation of “Race,” From the Colonial Period to the Eve of Civil War. Guest speaker for this webinar will be Dr. Nneka D. Dennie, who will take an in-depth look at the early history of the U.S. and the relationship this country has formed with “race.”

Sikhs Americans, like most in the United States, are unaware of the true history of race. In many cases, we as a society need to relearn the history that has been taught and take a hard look at the true reality within this country.

The six-part series Demystifying U.S. History and Activating Sikh Action for Black Justice Movements will be a substantive analysis of our current situation beginning with an appreciation of what African Americans have done in the past to fight white supremacy and their victories and defeats that have resonated for all communities of color.

The six-part racial justice series will provide viewers with the basis to understand the current historical moment through a substantive introduction to the history of race and protest against white supremacist violence and legislation.

The series will also highlight the societal articulation of white supremacy, race, class, gender, and sexuality. We hope to help correct the mistaken history in most Americans’ minds, and also the historical erasure of the women and LGBTQ folks who were so central to every part of the struggles we will study.

Without a historical appreciation of what African Americans have endured and survived, we as Sikh Americans cannot be good allies. We cannot be legitimate participants in the discussion regarding race now being undertaken in this country. If we do not know what has happened in the past, we cannot learn from the lessons of history, nor benefit from the mistakes of those who fought for justice in the past.

For more information on the series or to register for the webinar, please click here.

We will be joined by Rana Ayyub. She is a fear-less journalist reporting on Modi's India. Her in-depth piece in the New Yorker is a must read! During...
Read more