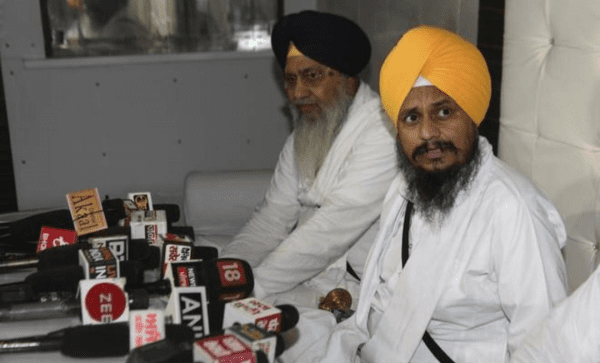 Giani Harpreet Singh was appointed by the SGPC as the head of the highest temporal seat of the Sikhs by the SGPC. However, he has secured recognition even in a section of the Sikh community, which is a strong critic of the SGPC and the Shiromani Akali Dal (SAD-Badal) controlling it due to his vocal statements in favor of several Panthik issues.

After witnessing back to back arrests made by the Indian agencies and Police of the Sikh youths under the charges of “waging war against the state” and “reviving terrorism to fulfill their separatist agenda”, he condemned these arrests while addressing media along with Takht Kesgarh Sahib Jathedar Giani Raghbir Singh after a function organized at Akal Takht Sahib to celebrate Miri-Piri Diwas, on June 30, 2020. He termed the arrested youths as falsely implicated and innocents.

After around a month, Giani Harpreet Singh again reminded the SGPC of its moral duty to extend legal aid to these youths in the courts to pursue these cases, when Bholath MLA and Punjabi Ekta Party (PEP) chief Sukhpal Singh Khaira, along with other rebel AAP legislators and families of the arrested youth, met him on July 27, 2020, seeking his intervention in the matter.

However, the gurdwara body which is also known as Sikh Parliament and meant for safeguards of the interests of the community has not responded so far to the repeated directives of the Takht Sahib. On both occasions, it remained silent and did not issue even a statement to condemn the victimization of the Sikhs in India in the name of Khalistan. Normally, its office-bearers take no time to react to even minor issues concerning the community.

It is giving such gesture when the issue of ruining the lives of the Sikh youths by implicating them in the Act, called draconian law, is burning one in the politics of Punjab and has turned out to be a big concern for the Sikhs living in India.

Pertinently, it is keeping mum when the SAD-Badal controlling Jathedar has also spoken against it.

In a statement, the SAD-Badal president Sukhbir Badal has cautioned Punjab Chief Minister Captain Amarinder Singh against indiscriminate use of the UAPA by state police under DGP Dinkar Gupta, known for his anti-Sikh stances.

“It is clear the state Police is misusing UAPA and it must stop immediately. The state police chief must get clear cut directions not register cases against Sikh youth under UAPA for minor offenses,” reads the statement issued on July 28, 2020.

“Arresting and jailing them amounts to human rights violations. We should be mindful of taking any step which can take Punjab back to the dark era”, adds Badal in the statement.