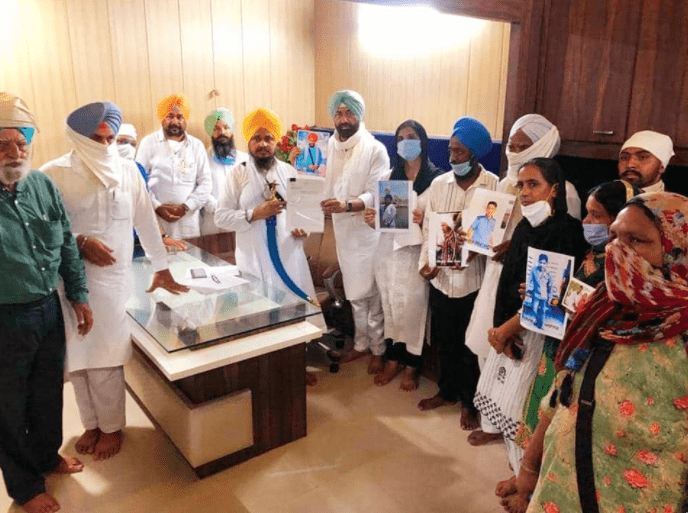 Through this memorandum, Giani Harpreet Singh has been apprised with a large number of FIRs registered against Sikh and Dalit youths under the garb of fighting against Referendum 2020. It is pertinent to mention that many of the youth arrested belong to poor families and have been unable to seek proper judicial support.

Interacting with media, Sukhpal Khaira said that the Captain led Punjab government has registered 47 FIRs during the last three years. “The number of FIRs registered under UAPA is same as those registered during the 10 years tenure of Badals in Punjab,” he added.

He further said that the Punjab government was trying to divert the attention of Punjab masses from its failures by creating bugbear of Khalistan. “All the FIRs registered under UAPA have almost the same stories as well as the same wording,” he added.

Read below the full text of the memorandum submitted by Sukhpal Singh Khaira and other leaders.

Subject:- Regarding false implication and arrests of Sikh youth particularly poor Dalits under the draconian UAPA law by central as well as Punjab governments, in the garb of tackling 2020 SFJ sponsored 2020 referendum and Khalistan.

Through this memorandum we would like to bring to your notice atrocities and excesses being perpetrated by the central Modi government and Capt. Amarinder Singh government against Sikh youth particularly the Dalits under the oppressive UAPA law.  Under the aforesaid draconian UAPA law, more than 16 FIRs have been registered during the recent weeks across Punjab while 47 FIRs have been registered during the 3 years tenure of Capt. Amarinder Singh government, in which utterly poor, defenceless and innocent people have been arrested at a large scale.

We have personally conducted spot visits and done a deep case study of some of the cases registered under UAPA law recently that we wish to bring to your notice, which proves that most people arrested under the said law are innocent and have been falsely implicated by the police declaring them Khalistani modules, terrorists etc.

Joginder Singh Gujjar, a 65-year-old heart patient from village Akala in my constituency Bholath who is an illiterate resident of Italy with no criminal record, has been arrested under UAPA law. The said arrest has been made on frivolous grounds like honouring one SFJ office bearer at a Gurdwara in Italy, a screenshot in his mobile phone regarding sending 200 Euros (Rs. 15,000) to one Sandeep Singh and his participation in the 2019 SFJ sponsored convention at Geneva as one amongst 2500 other participants. Merely on the basis of above said frivolous charges Joginder Singh Gujjar has been arrested under the said black law and thrown in Jail. The said information was procured by me after visiting the village of accused on 3rd July, where gram panchayat and village elders vouched for his innocence.

Thereafter we including Dr. Gandhi Ex-M.P Patiala and other MLAs visited Village Sehra of Patiala on 8th of July 2020, where a Dalit youth namely Sukhchain Singh was taken by the local police on the pretext of mere enquiry in the presence of village panchayat including Sarpanch Hakam Singh (99214-00047) on 26th June but later they learnt vide Newspaper report dated 28th of June that Sukhchain Singh had been arrested from a Naka at village Gajewaas under police station Sadar Samana with a pistol and few cartridges and booked under the said UAPA law. According to the F.I.R. registered by Samana Police 18 to 20 years persons most of whom are Dalits including Lovepreet Singh of Kaithal, Sukhchain Singh of Patiala, Amritpal Singh of Mansa, one Garry of Nawa Shehar and Jaspreet Singh of Majitha have been shown as accused persons under the UAPA law.

After our village Sehra visit we then visited village Shadipur of Kaithal district in Haryana on 13th of July to verify the antecedents of Lovepreet Singh @ Rajkumar (70568-53140) in the presence of village panchayat and elders who had gathered in the Gurdwara. The villagers categorically stated that Lovepreet who is a Dalit youth bore a good character and that prior to this case he had no criminal record. They said he was doing petty job at a CCTV shop in Samana. It is important to mention here, that same Lovepreet @ Rajkumar had been arrested in F.I.R. Number 154 at Delhi at Special Cell Rohini Delhi and has been lodged in Tihar jail. The villagers said that he had gone to Shaheen Bagh protest against CAA in Delhi for serving Langar.

After that we visited village Achanak in district Mansa to inquire about another Dalit youth Amritpal Singh (99146-23395), where again all the residents of the village spoke about his poverty and innocence. They said that Amritpal was living his live as daily wager and they vouched that he can never be associated with Khalistan or SFJ ideology as he consumed tobacco and cigarettes (biri’s).

After we brought the said framing of innocents under the oppressive law in public domain, Patiala police released one youth Jaspreet Singh s/o Palwinder Singh of Majitha in the said F.I.R. No. 144 saying that they lack evidence against him. Such a casual confession by the Patiala police is despite the fact that Sh. Dinkar Gupta DGP Punjab himself made a special press release dated 1st July declaring him and others as Khalistani modules in the said F.I.R. After his release Jaspreet Singh disclosed that he was given third degree torture during police custody as a result of which 5 bottles of Glucose were administered to him in view of his declining health. Thus, from the arrest and release of Jaspreet it is amply clear that the Punjab police is misusing the UAPA law for torturing and arrest innocents.

Despite our best efforts we haven’t been able to trace the said Gavy of district Nawa Shahar also nominated in the same case, whether he is in jail or absconding as the Patiala police are refusing to share any information.

The above mentioned case has been registered under UAPA law against 18 years Lovepreet Singh @ Rajkumar of village Shadipur, district Kaithal Haryana, whose only fault was to serve Langar at the then Shaheen Bagh Morcha against the CAA in Delhi who is now lodged in Tihar jail. The facts about the above said FIR were brought to my notice by one Kashmiri Sikh girl Sandip Kaur (93159-36474) who said that his young baptised brother Mohinder Pal Singh who is a Raagi (Tabla Player) and Gurtej Singh a Dalit youth who is resident of Mansa City and was working as an ordinary plumber, have also been arrested and lodged in Tihar jail. It is noteworthy to mention here that we also visited the home of Gurtej Singh at Mansa, where his poor wife and his aged father are lying sick and bedridden. This family is also extremely poor and living under pitiable conditions.

Case study of suicide committed by Lovepreet Singh of Ratta Khera (Sangrur) due to NIA investigations.

During our visit to village Ratta Khera on 20th July we were told that a Dalit Amritdhari Sikh youth merely 22 Years of age Lovepreet Singh (98555-01251) was summoned by NIA to their office at Sector 51 Chandigarh on 13th July for interrogation. Following this Lovepreet Singh committed suicide in a room of Gurdwara Amb Sahib by hanging himself on the intervening night of 13-14 July. According to information by villagers and family, officers of NIA and Punjab police humiliated and tortured him mentally and physically due to which he took the extreme step of committing suicide. He has also disclosed in his suicide note that after my death, my family or my friends may not be harassed. This clearly means that he could not tolerate mental and physical torture under the UAPA charges and took his life so that his family could be saved from the said black law. The residents of the village again stated that Lovepreet was a boy of good character, baptised and had no previous criminal record. His Uncle Gurmeet Singh told us that at the time of cremation of Lovepreet Singh they had noticed torture marks upon his private parts and legs. Therefore, we demand an impartial judicial probe to verify the CCTV footage, call records, post-mortem report of deceased Lovepreet during his interrogation at Sector 51 Chandigarh NIA office, so that the actual truth pertaining to his suicide can be brought to public domain.

A close perusal of the above said cases clearly indicates a well designed conspiracy by central agencies and Punjab police to implicate innocent Sikh/Dalit youth to tarnish the image of Sikh community as a whole as terrorists and anti national.  The police are specifically targeting such poor and innocent people under the UAPA law who are not only defenceless but are also unable to raise their voice against such oppressive measures.

Therefore, being the head of a glorious institution like Akal Takht Sahib we urge you to come forward and raise your voice against injustice and excesses being committed by both the said governments.

Therefore, we humbly urge you to intervene and take up the matter of gross injustice being perpetrated on innocents under the draconian UAPA law in the garb of fighting terrorism by the national as well as Punjab governments. We request you to direct the SGPC to appoint a team of legal luminaries to defend the aggrieved families of innocent victims arrested under the UAPA law and in the meantime award a monthly pension of minimum Rs. 5000 to the said aggrieved families.