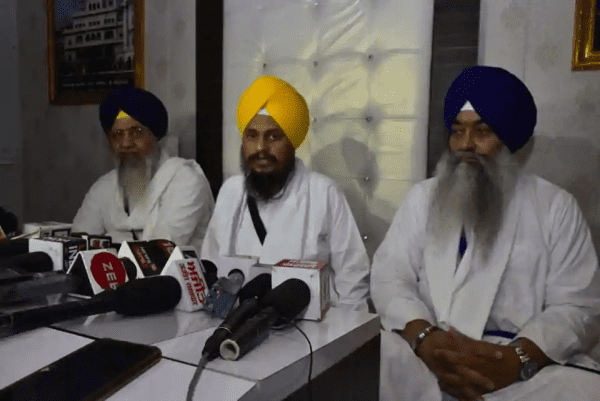 He was addressing the media persons at the secretariat of Takht Sahib after Bholath MLA Sukhpal Singh Khaira and other Aam Aadmi Party (AAP) rebel legislatures and aggrieved kin of the Sikh youths booked under the UAPA met him. Seeking his help, the delegation gave him a memorandum.

The jathedar said, “The grieving kin have told their tragic sagas. The youngsters are being framed in the cases under the UAPA for no reason or minor reasons. This is nothing but a bid to create an environment creating panic among the Sikh youths. If the youths have committed any mistakes it does not mean that they are ruined for their whole lives.

“Due to the situation created by the government, the Sikh youths are in deep panic. The Centre and Punjab government should stop these activities of terrorizing the Sikhs”, he said.

He told that he has asked the Shiromani Gurdwara Parbandhak Committee (SGPC) to pursue cases of these youths. “Most the youths booked belong to poor dalit families. Some were the only breadwinners in their families. One of them has committed suicide, case of whom must be probed by judiciary with impartial manner”, he said.

He also raised the issue of the Sikhs who are settled abroad but they are not allowed to return to Punjab due to ‘separatist’ tag. “Last year, 550th birth anniversary of Guru Nanak Sahib was celebrated. On that occasion, the centre promised to release the Sikh prisoners languishing in various jails of the country. However, only a few prisoners were released then and many are still behind bars. The centre should release remaining Sikh prisoners in the wake of 400th birth anniversary of 9th Guru Sri Guru Teg Bahadar, which is being celebrated next year”.

“Besides, I would like to raise an issue that many Sikhs who were booked under various charges when circumstances in Punjab were not normal, must be allowed to return to Punjab, their motherland where their holiest shrine, Sri Harmandar Sahib is situated. The cases registered against them should be quashed. They should be allowed to return to their motherland so that they could participate in the celebrations of the 400th anniversary”, he added.