CHANDIGARH, Punjab—The Dal khalsa has demanded judicial inquiry into the suicide of Sangrur boy Lovepreet Singh under mysterious circumstances at Gurdwara Amb Sahib after he was grilled by NIA in a case under UAPA.

The leaders of the Dal Khalsa made their demand after meeting Kewal Singh- the father of the deceased at their native village Ratta Khera. Leaders expressed their grief and condolences with the family members. 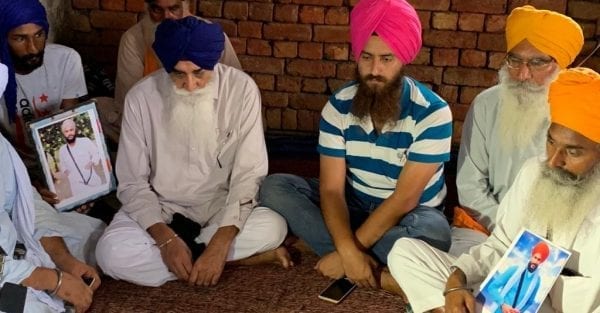 Lovepreet was a baptized Sikh and a granthi by profession. He was summoned by the NIA in a case registered by the Amritsar police in Oct 2018, which was later on in April 2020 taken over by the NIA.

The father of the victim told the media that he smell some foul game into the death of his son and demanded transparent and impartial probe.

Yesterday, the family members of Lovepreet along with Sukhpal Singh Khaira met Sangrur SSP and demanded thorough probe into the matter. It was reported that the SSP handed over the probe to local SP (D).

Reacting to it, Dal Khalsa president Harpal Singh Cheema said the Punjab police officer won’t be in a comfortable position to grill or question the officials of the NIA- which is the central premier agency with unbridled powers. He said the accused went to NIA office and remained there for the whole day. After returning at late evening, he committed suicide at Gurdwara room where he was staying.

Cheema said something horrific must have occurred during investigation by NIA that the young boy took extreme step and ended his life. “The fear of being falsely framed under draconian laws could be the one reason,” he argued.

He said only the sitting judge of the Punjab and Haryana High court can dig out the truth. He demanded from the chief minister to hand over the inquiry to higher judiciary- short of that everything would lead to injustice.

Coming down heavily on Union as well as State government for terrorizing the youth under the garb of tackling 2020 referendum campaign, he said Lovepreet has become casualty of these draconian laws, that needs to be repealed.

SYP president Paramjit Singh Mand, who accompanied HS Cheema, said to kill dissent, the governments are using bullying laws to silence dissenters. He said the youth are being targeted, harassed and humiliated at police stations and the political leadership including CM has shut their eyes providing impunity to forces.