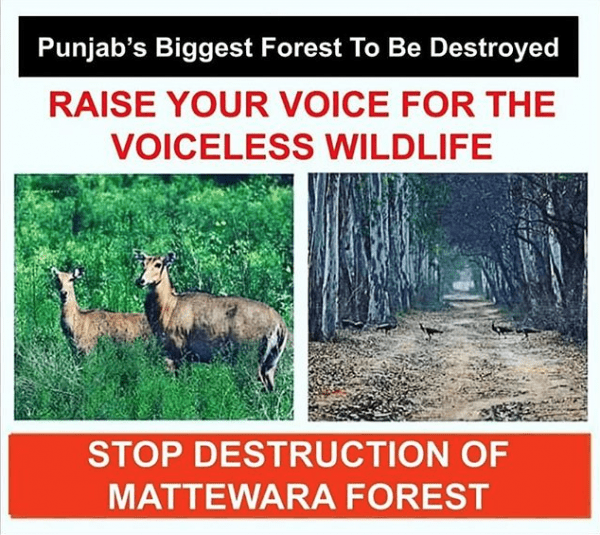 Per the recent decision by the Punjab Cabinet, one-fourth of Punjab’s essential wildlife reservoir, the Mattewara forest, will be destroyed in order to develop Industrial units and factories.

EcoSikh, an environmental group stated that this decision has come as a serious blow to the Punjabis as the state is already ridden by the incessant flow of untreated chemical waste in the rivers. It is pertinent to note here, that the Mattewara forest is the only reservoir of biodiversity in the state.

Punjab ranks top in the list of states with the lowest ratio of forest area in India, Punjab government’s new decision unravels government’s myopic vision for the state, EcoSikh stated.

“The destruction of the forest will have very major effects on Punjab’s ecology and environment. The state has less than 4% forest area left.”

Mattewara forest reserve is located on the banks of river Sutlej and is a natural sanctuary to a number of peacocks, antelopes, deers, sambars, and various other creatures that are close to extinction in Punjab. In addition to this, there’s a presence of variety of rare native plants and trees which makes it the center of attraction for both students and nature-loving citizens.

“Punjab is already suffering from severe environmental degradation and pollution and so many young children and the elderly are suffering from illnesses from this menace. Climate change is going to have a major impact on Punjab and its future. The decision by the cabinet must be reversed in favor of a breathing Punjab,” EcoSikh’s Ravneet Singh stated.

Other social and environmental activists have also raised concerns over recent developments. Kuldeep Khaira, another such activist said that the Punjab Government had earlier uprooted thousands of trees from Ludhiana during the expansion work of the roads. He said that the people of Ludhiana were promised that these trees would be planted in the Mattewara forest, which never happened.