NEW DELHI—Three Sikhs were arrested by the Police in Delhi in relation to terrorism-related activities last month in June. However, their friends, family members, and neighbors say that the only crime of the three amritdhari Gursikhs is that they were serving free food to the families impacted by coronavirus pandemic. Now, weeks after their arrest, they remain imprisoned and judges refuse to hear their cases.

These lads were today produced in the court of Additional Sessions Judge Dharminder Rana through video conferencing. Mahinderpal Singh is lodged in Tihar Jail No. 8, Lovepreet Singh and Gurtej Singh are lodged in Mandoli Jail. No action could be taken in today’s case so the next course of action was fixed for August 7.

These youth are being represented by Advocate Paramjit Singh.

Mahinder Pal Singh’s sister Bibi Sandeep Kaur told Sikh24 that her brother had came from Kashmir to study in Delhi.
“He’s a very friendly and sociable guy and is always ready to serve the needy. On June 15, he was returning home from Uttam Nagar Gurdwara with a friend Gurpreet Singh when Rohini police stopped his motorcycle on the way and arrested him. When he did not come home until late at night, we started searching for him. We did not get any information about him and at around 2.30 pm, Gurpreet called his house and told him that Rohini Special Cell Police had picked them up. We went to the special cell at the same time and then we are told that they have been brought here for some questioning but later Gurpreet was released and a false statement was lodged against Mahinderpal.”
She mentioned that Gurpreet was kept in the Rohini Special Cell by the police for two days and a case was registered against Mohinder Pal for carrying ammunition. Two other Gursikhs were brought from Haryana and Punjab and were also implicated in the case along with Mahinderpal. Mahinderpal Singh was serving langar in the morning and evening for about 500 needy people impacted by coronavirus every day.
Lovepreet, another youth arrested by the police, was helping with free food distribution. Be is the agitation against CAA in Delhi’s Shaheen Bagh or coronavirus, he was always volunteering to help the needy out. 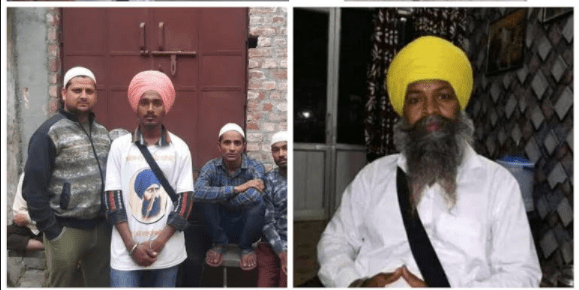 Sandeep Kaur appealed to all Sikh leaders in Delhi and Punjab to come forward and use all possible means to get the lives of the innocent Sikhs out of the jails as soon as possible.