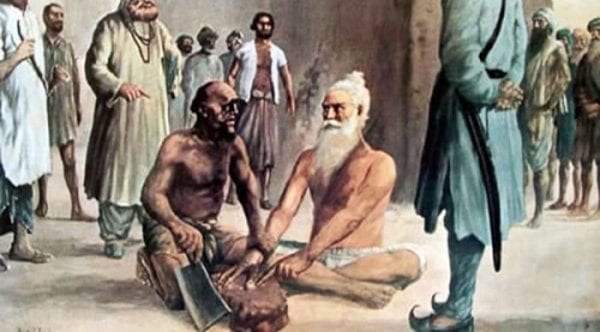 Shaheed Bhai Mani Singh was an 18th-century Sikh scholar and martyr. He was a childhood companion of Guru Gobind Singh and became Amritdhari when Guru Sahib inaugurated the Khalsa in 1699. Soon after that, Guru Sahib sent him to Amritsar to take charge of Sri Harmandir Sahib, which had been without a custodian since 1696. He took control and steered the course of Sikh destiny at a critical stage in Sikh history.

By 1737, the Mughal government of Lahore had strictly prohibited the Sikhs to visit Amritsar and take dip in the holy sarovar. To overcome this restriction, Bhai Mani Singh applied to Governor Zakariya Khan for permission to celebrate Bandi Chhod Diwas at Sri Harmandir Sahib. The permission was granted for a promised payment of Rupees 5,000 to the Governor. Bhai Mani Singh was certain that he would be able to pay the sum out of the offerings that would be made by the Sikhs who were invited to come.

The Sikhs came in large numbers, but Zakariya Khan, under the pretext of keeping order, sent a force under Diwan Lakhpat Rae to Amritsar. It marched towards the city on the day of the festival in order to intimidate and disperse the Sikhs and the festival broke up at the approach of the Mughal army.

Later, Bhai Mani Singh was arrested for not paying the stipulated sum. He was asked by the Qazi to embrace Islam or else face death. Bhai Mani Singh stoutly refused to barter his faith and boldly opted for death.

By orders of Zakarya Khan, Bhai Mani Singh was executed at Nakhas, Lahore in December, 1737 AD. The Nakhas has since been known as Shaheed Ganj – the place of martyrdom.

The nature of his execution in which he was dismembered joint by joint has become a part of the daily Sikh Ardas (prayer).