Naureen Singh — a Coloradan, has graduated from the United States Air Force Officer Training School. This accomplishment makes Singh a second-generation Sikh American to serve in the armed forces as an officer, following her father, Colonel (Ret.) G.B. Singh, the U.S. Army’s highest-ranking Sikh American to keep his turban while serving active duty. 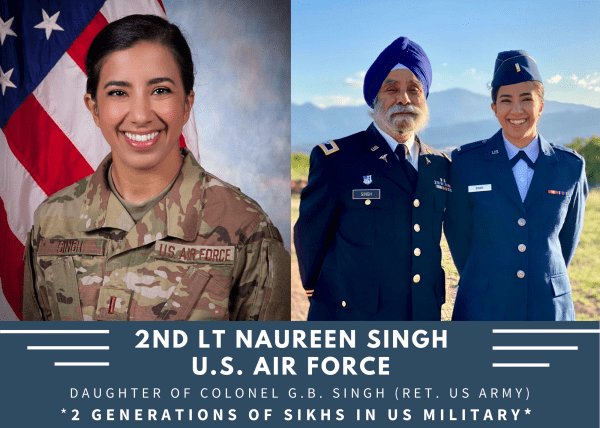 Naureen Singh, 26, a student and community organizer from Colorado Springs, has just been appointed a Second Lieutenant in the United States Air Force.

Lieutenant Singh first started the process to become a U.S. Air Force Officer in 2016. She was inspired by her father, Colonel (Ret.) G.B Singh’s commitment and courage to serve while keeping his Sikh articles of faith intact.

Lieutenant Singh is now a second-generation Sikh American to serve as an officer in the Armed Forces. Her father, Colonel (Ret.) G.B Singh joined the U.S. Army in 1979, one of a small number of Sikhs allowed to retain articles of faith, grandfathered in after a change in policy in the early 1980s forbidding soldiers from exhibiting their religion with “conspicuous” clothing or style of hair or beard. While the Pentagon does not track religious affiliations within families serving, Singh believes they are among the very first to have two generations of Sikh Americans, serving as officers in the United States Armed Forces.

Colonel (Ret.) G.B. Singh furthers, “I am proud of Naureen and am certain she will be a positive asset to the U.S. Air Force as she embarks on this journey.”

The U.S. Officer Training School is located at Maxwell Air Force Base, Alabama, and it is one of three commissioning sources for the U.S. Air Force, the other two being ROTC, and the U.S. Air Force Academy. The program’s mission is to educate and train officers of character, equipped to lead and ready to win.

Lieutenant Singh was a part of the first class to go through the entirety of the training during the COVID-19 pandemic. Trainees in the program had to go through numerous challenges and obstacles including assault courses, rigorous academics, drill and ceremony, and physical training.

Lieutenant Singh was commissioned virtually on 22 May 2020 in Alabama, USA, by Colonel (Ret.) G.B. Singh, through FaceTime at 5 AM MST. Colonel (Ret.) G.B Singh also gave her initial oath of enlistment before she went through this training.

“Even though I had a completely different set of struggles than my dad, I recognize that because of him and his sacrifices, I was able to move and push forwards. I hope that as a leader, I can continue to do the same for others about the opportunities that exist in public service, even if they never considered it in their realm of possibility,” she explains.

Lieutenant Singh is joining the Air Force Reserve and plans to continue to pursue her Master’s degree in Criminal Justice at the University of Colorado at Denver. She hopes to continue a career in public service and continue to educate communities of their rights and empower them to organize around issues they care about.