LAHORE, Punjab—19 Sikh pilgrims, along with a Muslim driver, today lost lives in an accident when they were heading towards Gurdwara Sacha Sauda after paying obeisance at Gurdwara Janam Asthan Sri Nankana Sahib. A train named Shah Hussain Express,  operating between Lahore and Karachi, rammed into their coaster bus at an unmanned railway crossing near Sheikhupura in Punjab. 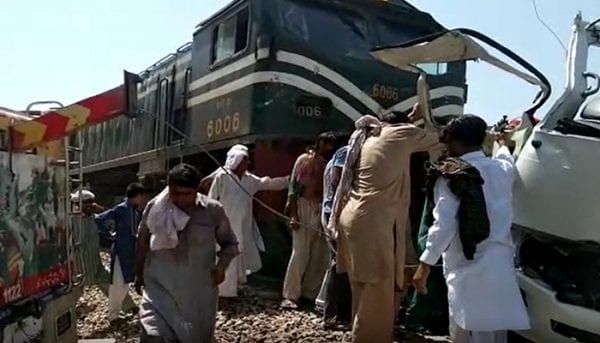 At least eight other pilgrims got injured in this accident occurred at around 20 Kilometers from Sheikhupura. All of them have been shifted to District Headquarters Hospital, Sheikhupura.

Speaking to Sikh24, Babar Jalandhari informed that most of the pilgrims in this bus were from Peshawar while one or two were from Nankana Sahib.

Eye-witnesses have revealed that this accident occurred due to hastiness shown by the coaster driver to cross railway crossing while overtaking three already standing vehicles.

At the time of writing this report, the dead bodies of the other two Sikh pilgrims were not identified.

Breaking news: Atleast 20 people died in an accident in Pakistan, all of them were from sikh family