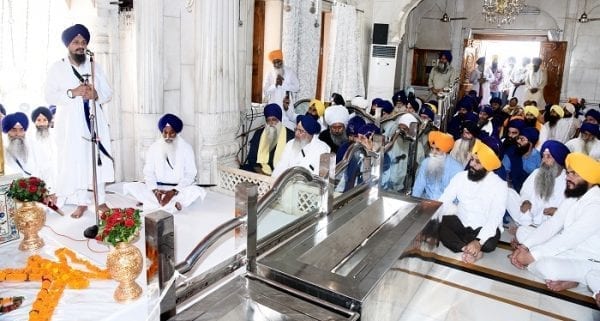 Speaking on this occasion, SGPC appointed acting Akal Takht Jathedar Giani Harpreet Singh directed the Sikh masses to guard the Sikh tenets, customs, and traditions while remaining vigilant about the attacks being carried out on Sikhism via social media.

Pained over the misuse of social media by some discouraging and malicious elements for instigating controversies among Sikhs, Giani Harpreet Singh has directed the Sikh youths to vigilantly use social media and promote only encouraging posts about Sikhism.

“We need to unite together as it’s mandatory in the current scenario to counter the emerging challenges in front of us,” he added.

Akal Takht means the throne of the immortal and is the highest political institution of the Sikhs. “Akal” means “The Timeless One” – another term for God. “Takht” means “throne” in Persian. The Akal Takht is an impressive building that sits directly in front of the causeway leading to the Golden Temple in Amritsar. The Akal Takht was founded by Guru Hargobind Sahib Ji in 1606 and was established as the place from which the spiritual and temporal concerns of the Sikh community could be acted upon.

It stood as a symbol of political bulwark against the Mughal Emperors in the 17th and 18th centuries. Various attacks on the Akal Takht and Sri Harmandir Sahib have been led in the past by Ahmed Shah Abdali and Massa Rangarh in the 18th century.

On June 4, 1984, the Indian Army did more than just damage the outer facade of the Akal Takht, they destroyed the sanctity of the Akal Takht with tanks and reduced it to rubble, while attempting to take out Sikh militants in a controversial military operation known as Operation Bluestar.