LAHORE, Punjab—Senior PML (N) leader Khawaja Saad Rafique, who held the reins of Pakistani Railways Ministry during the last tenure of Nawaz Shariff, has hurt Sikh sentiments by dubbing the great Sikh emperor Maharaja Ranjit Singh as a profligate, dacoit and looter. He has also leveled allegations of desecrating and looting mosques on Maharaja Ranjit Singh. 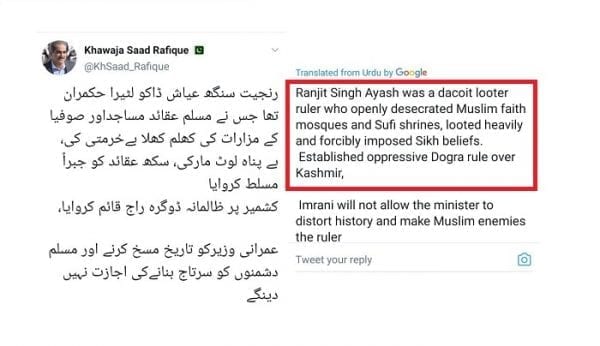 Recalling the tenure of Maharaja Ranjit Singh, Gopal Singh Chawla said that no one got capital punishment during his four decades-long regime.

Was Maharaja Ranjit Singh really a profligate, dacoit, and oppressor?

In a survey named “Greatest leader of all times poll” carried out by BBC History Magazine this year, Maharaja Ranjit Singh was voted as the greatest ruler of all times among all the international rulers. The name of Maharaja Ranjit Singh outshined the names of other prominent international leaders, including Amílcar Cabral, Winston Churchill, Abraham Lincoln, and Elizabeth I.

In this survey, the readers were asked to choose a leader who exercised power and had a positive impact on humanity and to explore their achievements and legacy.

Around 5000 readers participated in this survey. 38% of voters voted for Maharaja Ranjit Singh while Amílcar Cabral and Winston Churchill secured 25% and 7% votes. Interestingly, American President Abraham Lincoln and UK’s queen Elizabeth I stood fourth and fifth in this survey.

Maharaja Ranjit Singh’s name was nominated in this survey by the renowned historian Matthew Lockwood.

It is a well-known fact that persons belonging to all the religions were allowed to exercise their faith without any fear in the regime of Maharaja Ranjit Singh. His tenure is considered as the most prosperous time of North India.