CHANDIGARH, Punjab—Strongly condemning the recent attack on Gurdwara Guru Arjan Dev in Derby (UK), the All Parties Hurriyat Conference has expressed solidarity with the Sikh community. The APHC asked the British government to take stern action against the attacker so that no one could dare to commit such a heinous act in the future. 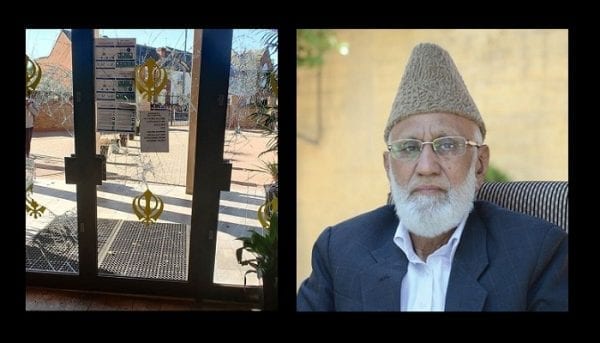 All Parties Hurriyat Conference (APHC) is an alliance of 26 political, social and religious organizations formed on 9 March 1993, as a united political front to raise the cause of Kashmir.

In a press note shared with Sikh24, All Parties Hurriyat Conference’s spokesperson Muhammad Ashraf Sehrai has said that this attack was extremely painful as Sikhs have always stood for the cause of the people of Jammu and Kashmir.

Smelling Indian agencies’ hand behind this attack, Muhammad Ashraf Sehrai said that Sikhs have always supported the Kashmiris. “When the innocent Kashmiris were being assaulted by Hindu extremists in all parts of India in August last year, the Sikhs opened the doors of their Gurdwaras for the oppressed Kashmiri Muslims and provided them food and shelter,” Sehrai said while adding that the Kashmiris can’t even think of attacking Gurdwara.

He expressed hope that the Indian agencies will not succeed in its nefarious design focused on creating discord between Muslims and the Sikhs.

Muhammad Ashraf Sehrai’s son Junaid Sehrai was an active Kashmiri militant who recently lost life in an encounter with the Indian forces in Srinagar’s Nawakadal area on May 19.

On May 25, a Muslim man of Pakistani origin named Mohammed Ibrar had attacked Gurdwara Guru Arjan Dev in Derby. He smashed the Gurdwara property causing damage worth thousands of pounds.

After the attack, he had left a written note in Gurdwara Sahib in which he had tried to depict that he launched this attack out of anger against the Indian government for oppressing Kashmiris.

Attack on Derby Gurdwara: Attacker comes out to be a Muslim of Pakistani origin