NEW YORK, USA—On May 25, a Muslim man of Pakistani origin attacked Gurdwara Guru Arjan Dev in Britain’s Derby. This attack occurred exactly on the day when the entire Muslim community was celebrating Eid-ul-Fitr and the worldwide Sikhs were greeting our Muslim brothers on this auspicious day. 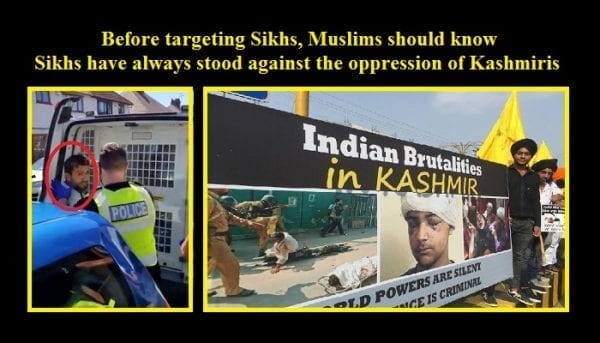 After smashing the property of Gurdwara premises worth thousands of pounds, the attacker left a handwritten note behind, in which he clearly revealed his disturbed mindset due to the ongoing oppression of Kashmiris by India.

It clearly shows that a religious place of Sikhs got attacked because the attacker mistook Sikhs as supporters of the Indian government which is continuously oppressing Kashmiris.

This attack occurred because the Sikhs lack their distinct identity as nationhood and for being a stateless community. The Sikhs got targeted for the excesses being committed by the Indian government on Kashmiris.

Initially, the Indian media didn’t pay heed towards this attack, but as soon as it came to fore that the attacker was a Muslim man of Pakistani origin, the Indian media outlets started airing this news considering it a golden opportunity to infuse hate in Sikhs against Muslims.

Sikhs have always stood against the oppression of Kashmiris

In Canada, the National Democratic Party’s head Jagmeet Singh had strongly condemned the oppression of Kashmiri people by India.

Jagmeet Singh condemns oppression of Kashmiris by India; Supports right to self-determination for Sikhs and Kashmiris

Similarly, the Shiromani Akali Dal (Amritsar) and Dal Khalsa had also condemned the abrogation of Article 370 by terming it a murder of democracy.