CHANDIGARH, Punjab—As expected earlier, controversial Punjabi singer Sidhu Moosewala has gone underground to evade arrest in a case registered against him under non-bailable sections 25 and 30 of Arms Act besides section 188 of IPC and section 51 of Disaster Management Act. Notably, Sidhu Moosewala and six police cops including a DSP were indicted after a video of cops giving training of AK-47 to Sidhu Moosewala had gone viral over social media on May 4. 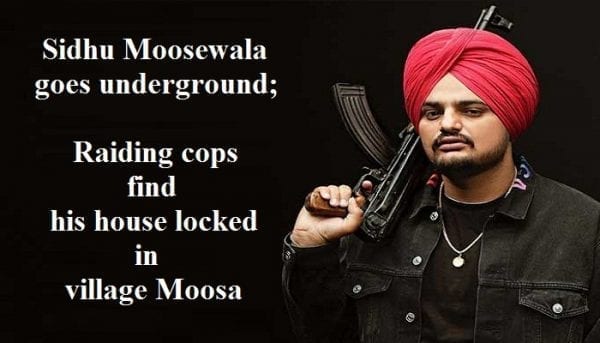 On May 22, the Punjab police cops conducted a raid on Sidhu Moosewala’s house in village Moosa of district Mansa where they found his house locked.

Interacting with media, Barnala’s SP (D) Rupinder Bhardwaj said that raids were also being conducted to arrest other police cops indicted in this case but they have also gone underground. However, he denied conducting any raid on Sidhu Moosewala’s house by Barnala police.

On the other hand, Mansa police cops have kept their lips tight on this issue.

Speculations are being made that Sidhu Moosewala is hiding in his village while maintaining an understanding with police cops.

However, it’s unclear whether the Punjab police is trying to trace him with the help of cyber tools or is just playing the drama of chasing him.