MELBOURNE, Australia— For over 4 decades, the Sikh community in Afghanistan has suffered war-like conditions. They have endured barbaric attacks resulting in the loss of loved ones and having their religious freedom stifled by terrorism. Thirty years ago, the population of Sikhs in Afghanistan was said to be around 250,000, but after decades of conflict and massacre through the rise of the Taliban, many have sought asylum in other countries and the community is thought to have been reduced to about 120 families. 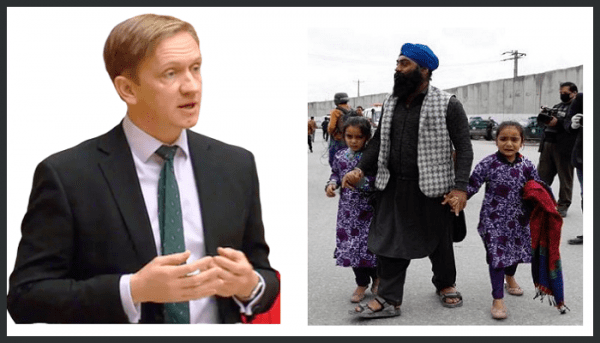 The United Sikhs has been advocating for and serving Afghan Sikhs for many years. This work is ongoing and the families of those lost and injured have been provided assistance. Avenues for immigration documentation to allow for resettlement are being pursued and the necessary resources to obtain such documentation have been put in place.

After the most recent terrorist attacks on March 25, 2020, in Gurdwara Guru Har Rai Sahib Ji in Kabul, the Sikh Diaspora, international leaders and human rights advocates moved swiftly to condemn the persons and groups responsible. The United Sikhs reached out to government leaders around the world to stand against the religious persecution in Afghanistan and to protect Sikhs and other ethnic-religious minorities in the area. The Islamic State has taken responsibility for the March 25, 2020, terrorist massacre in the gurdwara that left 25 people dead and many others injured. On March 28th, there was another terrorist attack directed at the Sikh community with improvised explosives. Witnesses state that the Islamic State also issued a 10-day ultimatum for Sikhs to leave Afghanistan. The remaining roughly 650 Sikhs in Afghanistan wish to leave as immediately as possible, so they can escape the concentrated and constant violence in the region at the hands of terrorists or external actors pursuing mass killings against Sikhs.

The United Sikhs team in Australia has been working closely with elected representatives of Parliament to raise the concerns of the Afghan Sikh community and warrant that Australia play a pivotal part in ensuring those innocent families in consistent danger can be saved through resettlement. The United Sikhs forwarded their concern for the Sikhs and Hindus in Afghanistan by writing to all of the Parliamentarians of Australia, including the Hon’ble Prime Minister, Mr. Scott Morrison. They were requested to treat the Afghan Sikh issue on a priority basis and provide them safe refuge in Australia as the lives of those Afghan Sikhs and Hindus hangs in the balance.

Mr. Julian Hill, an Australian Labor Party MP from the Bruce Constituency, has listened to our teams’ representations and taken a proactive approach by writing to the Australian Foreign Affairs Minister, Senator the Honourable Marise Payne MP. In a detailed letter, Mr. Hill highlights his concerns for the safety of the Afghan Sikh community and fears that if urgent action is not taken, the threats from extremist groups to murder Afghan Sikhs en masse could turn into reality. Mr. Hill calls for an urgent international humanitarian effort to facilitate the resettlement, in which he believes Australia can play a vital role by offering assistance to broker a global agreement. 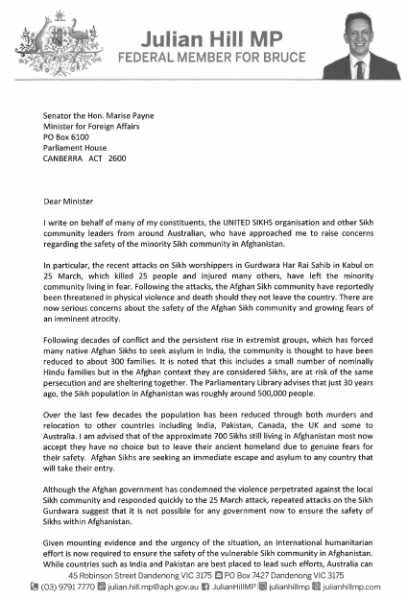 “We thank Mr. Julian Hill for his advocacy and pre-emptive consideration for the minority Afghan Sikh community. Our global legal and humanitarian response teams are working collectively and give us the lucid ability to build mechanisms to confront these potential scenarios in an immediate manner anywhere in the world. The Panth has to unite to take on such challenges with the help of friendly nations and world bodies.  The welfare and the security of the minorities in Afghanistan are paramount and we must move with sheer urgency”, says Gurvinder Singh, United Sikhs Director (Australia).

We thank our supporters, donors and members as without your support this global advocacy would not be possible. We call on you to continue so we can keep on engaging, agitating and bringing the issue of our Afghan brothers and sisters into the international arena.