HARIDWAR, Uttrakhand, India—The Supreme Court verdict in the Babri Masjid Case might have favoured Hindus, but the bench’s citing of Guru Nanak’s visit to Ayodhya has re-ignited the demand of the Sikhs to re-build a historical Gurdwara that was demolished in 1984 by Hindu mobs.

Sikhs are asking that if Guru Nanak Dev Ji’s visit to Ayodhya can be an important factor in the Supreme Court ruling, then why not use the same sources used by the Supreme Court and allow re-building of historical sites associated with Guru Nanak’s life, which were demolished by mobs in 1984.

Gurcharan Singh Babbar, who has led the campaign to seek re-building of Gurdwara Gyan Godri Sahib organized a nagar kirtan to the site, but he was arrested at the border. He was allowed to visit the site but under escort. Babbar has been vocal about getting the demolished site re-built, however, till date the local administration has not provided any cooperation.

During the fourth ‘Udaasi’, the founder of the Sikh religion, Guru Nanak Dev Ji visited Haridwar and shared a message of humanity there. Gurdwara Gian Godri Sahib was established in the memory of Guru Nanak Sahib’s valuable teachings at Har-Ki-Paorhi in Haridwar. The Gurdwara was demolished in 1984 and later the site was taken over while carrying out the beautification project of the Ganga River.

Gurcharan Singh Babbar expressed frustration while speaking with Sikh24. “First they demolished the site, then they illegally occupied and now they want us to file a case. It shouldn’t be like that,” he said while talking about the historical site of Guru Nanak’s visit to Haridwar. “We are ready to face arrests, but we want the entire world to know that the Uttrakhand police arrested a nagar kirtan,” he said.

In addition to Gurcharan Singh Babbar, Karnataka born professor, Panditrao Dharenavar also visited the site and raised awareness of the historical shrine. Professor Dharenavar currently teaches Punjabi while living in Chandigarh. He has made the propagation of the Punjabi language his life mission. 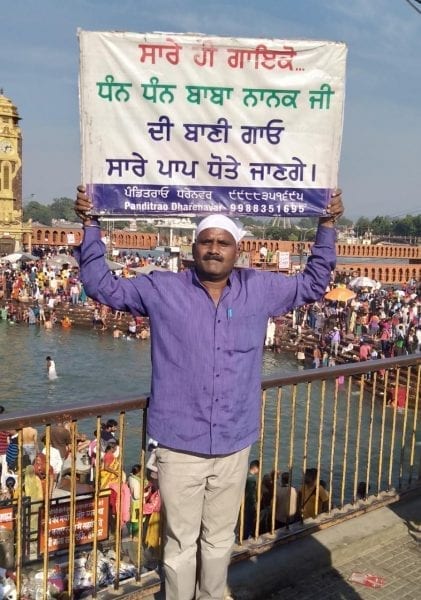 Dharenavar recited Sri Jap ji Sahib ji at Har-Ki-Paorhi in Haridwar and demanded the local administration to re-build the Gurdwara. He held banners while campaigned about the history of Gurdwara Gyan Godhri Sahib.

“I have also written a letter to Chief Minister of Uttarakhand to take steps to rebuild  Gurdwara Gyan Godri,” he told Sikh24. “Sikh Sangat of the world is celebrating Sri Guru Nanak Dev’s 550th parakash celebration by visiting Karatapaur and Sultanpur Lodhi but I visited Haridwar and recited Sri Jap Ji Sahib.”

Panditrao Dharenavar is originally from Karanataka but learned Punjabi so well that he has penned down 12 books in Punjabi and translated Sri Jap ji Sahib into the Kannada language of Karanataka. He told Sikh24 that he is committed to get the historical shrine re-built and for that he will visit the site every year.