CHANDIGARH, Punjab—Commemorating the genocidal week of Delhi carnage, the Dal Khalsa today held a public meet to deliberate on what they called politics of genocide being perpetuated by Indian mainstream parties against minorities since Nov 1984. 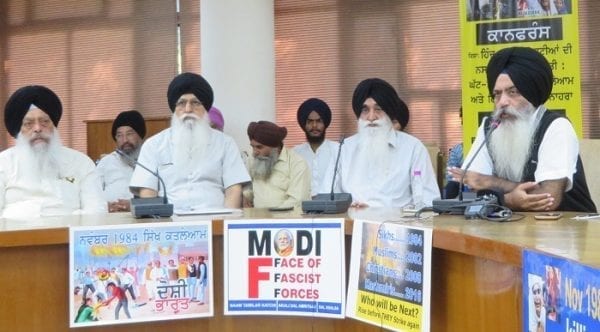 Representatives of SAD (Amritsar), United Akali Dal and Students for Society (SFS) participated in the meet to pay homage to the victims of the attempted genocide and express their concerns on Indian government’s fascist agenda.

Speakers were of the view that in the aftermath of Delhi massacre, while the Sikh community was struggling to get justice for the victims, the Indian state sharpens its edges to repeat the mayhem in a different format in Gujarat, Orissa and Kashmir.

The speakers were apprehensive that the Supreme Court decision after two weeks on Babri Masjid case might trigger another rioting against Muslims. 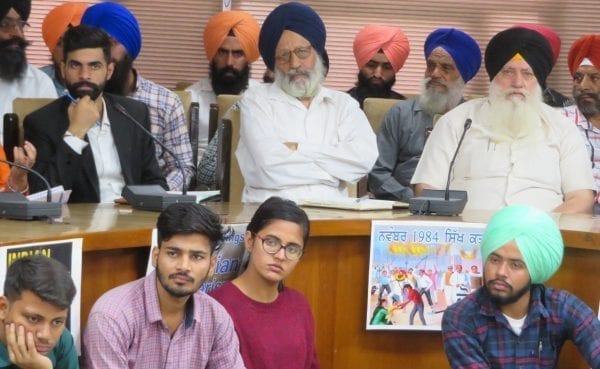 Prominent among those who took part in the deliberations include human rights activist Advocate Amar Singh Chahal, writer Jaspal Singh Sidhu, Punjab University student leader Kanupriya and Harman, Rajinder Singh of Khalsa Panchayat and Mandhir Singh. They were of firm belief that had the perpetrators of Nov 1984 massacre duly punished, the horrific events of Gujarat in 2002 and Orissa in 2008 would not have occurred.

The gathering adopted a condolence resolution on the passing away of Prof SAR Geelani of Delhi University describing him true and valuable friend of Sikh cause and strong voice of Kashmir’s freedom struggle.

Describing the 1984 killings as ‘genocide of Sikhs’, Dal Khalsa president Harpal Singh Cheema said that whenever injustice went unpunished and the perpetrators of crime were rewarded with cabinet posts, the terrible beast of communalism is revived in more horrific ways.

He urged the UN, under the new Secretary General, Mr. António Guterres to wake up to reality that India -the land of Gandhi is a hate-filled, intolerant society with a political climate detrimental to a large cross section of society, especially regional identities, minorities and nationalities, said the head of pro-freedom Sikh group. 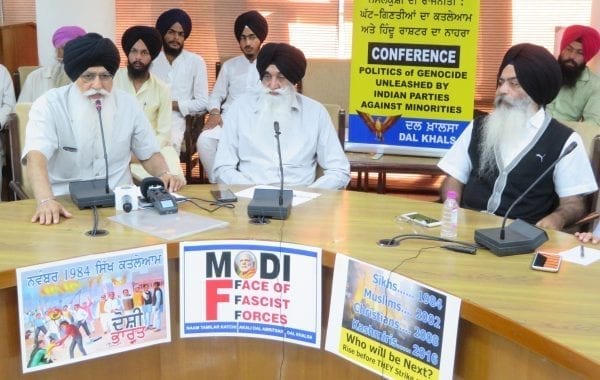 Party’s senior leader H S Dhami said Indian media and politicians deliberately describe the anti-Sikh pogrom of 1984 as “riots.” The anti-Sikh violence of 1984 was not a riot. The massacres were not spontaneous, anomalous or disorganized, said he.

Party spokesman Kanwar Pal Singh while speaking on the occasion said Nov 1984 carnage in Delhi remains one of the blots on Indian democracy. Another blot is abrogation of Article 370 and holding and paralyzing lives of millions of Kashmiris on gunpoint. He further said the issue of the orchestrated visit of far-right members of the European Parliament to Kashmir, a move meant to hoodwink world community that has backfired internationally. It’s Modi’s disastrous PR exercise.

Praises were showered on Pakistan’s Prime Minister Imran Khan for fulfilling the long cherished desire of Sikhs. “Kartarpur corridor is going to be reality in next 72 hours and credit goes to Imran. The organizers thanked Imran government for taking initiative and forcing the Modi Govt to fall in line and accomplish the project. Left to New Delhi, our people would have been still praying for darshan deedare,” said he.

Coming down heavily on Captain Amarinder Singh for branding Kartarpur corridor as Pakistan’s new design, Narien Singh said Punjab CM is suffering from ISI phobia. While PM Narendra Modi is claiming the credit for corridor on one hand, and on other Amarinder is calling it Pakistan’s trap.

The gathering wondered as what was stopping Government of India in releasing the Sikh political prisoners who have completed their life sentence. The announcement to this regard was made fifteen days earlier citing goodwill gesture by Union Govt on the sacred occasion of 550th Guru Nanak’s Parkash Purab but in reality none has been released till date.