BIRMINGHAM, UK—On the eve of the 550th birthday of Sri Guru Nanak Sahib, a new chair commemorated to Guru Nanak Sahib is being launched at the University of Birmingham by the Indian government. Hardeep Singh Puri, the Minister of Civil Aviation of India, made this announcement while addressing a function at India Institute in University of Birmingham. 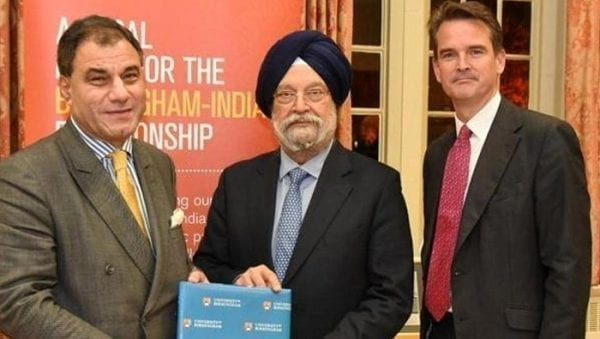 Puri further said that the message of Guru Sahib would get preached more strongly with the establishment of this chair in this important university. He claimed that the researchers will be able to make new discoveries.

“I believe that the Guru Nanak Chair will enable further research on how best the message of Guru Nanak can be shared with the larger community in the UK and beyond, and how mankind can benefit from this message which has an eternal value to make our world a better place,” he said.

Puri also said that the Indian government would pay constant attention to this chair. He said that usually when such events occur, attention is paid for this, but the Government of India will always help the Chair established in the name of Guru Sahib.

“First financial aid has been given for five years, but later on it will be extended again,” he added.

Website on the Role of Sikh Soldiers in World Wars Launched