CHANDIGARH, Punjab—With the noticeable victory of NDP leader Jagmeet Singh, there is not limit of joy for the residents of village Thikriwala (Barnala). A festival like atmosphere is being observed in village Thikriwala since the announcement of Canadian election results. 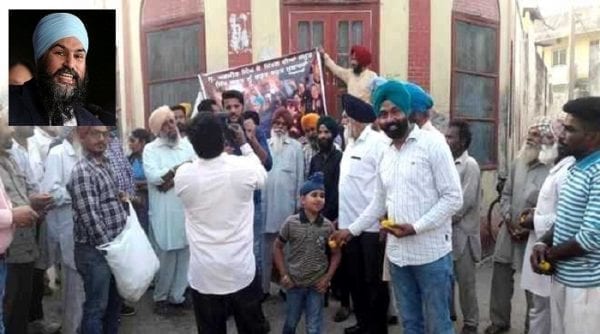 It is pertinent to note here that Jagmeet Singh is the great grandson of Captain Hira Singh who was the cousin of Indian freedom fighter Sewa Singh Thikriwala. Sewa Singh Thikriwala was jailed on a fabricated charge of utensil theft by the rulers of the erstwhile Patiala princely state where he died during a hunger strike in 1935. Till date, Jagmeet Singh has visited his ancestral village only once.

An octogenarian retired head teacher Surjit Singh said that his villagers were keeping a close eye on the Canadian elections and many villagers also offered prayers at local Gurdwara Sahib for his victory. “There are many who used to converge near his ancestral house here to offer support,” he added.

A local farmer named Dhanna Singh told the media that Jagmeet Singh has emerged as a role model for the youths of his village as well as the entire Sikh community.

“Jagmeet has brought laurels to Sikhs and Punjabis living across the globe. We hope he will spare time and visit his village,” said another villager Manjit Singh.

Balwant Singh Bhullar, a villager, said celebrations started immediately after villagers got to know about the good performance of the NDP. “Many have been distributing laddoos (sweets) while others have plans to celebrate it like Diwali with special lighting on their houses,” he added.